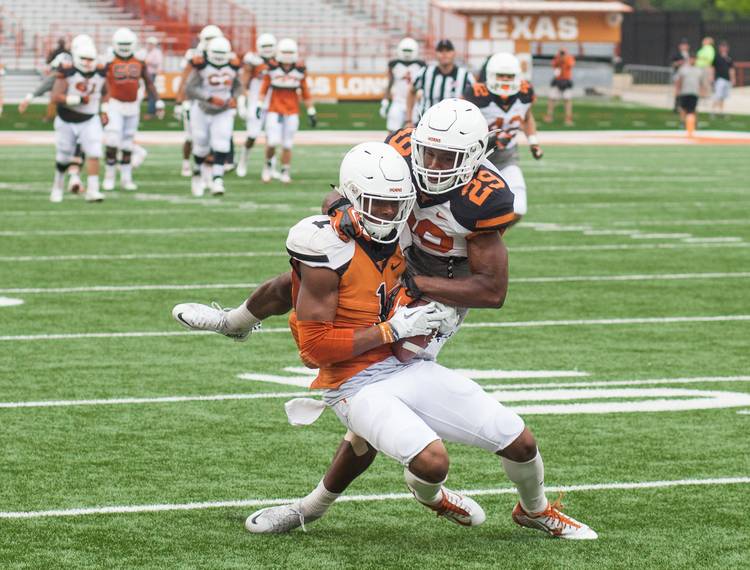 When Texas senior Sheroid Evans completed his comeback this past weekend, he did so as a starter.

Evans started at cornerback in Texas’ 50-47 double-overtime win over Notre Dame on Sept. 4, and he collected a tackle and one of the Longhorns’ four pass break-ups. It was the first game since October of 2013 for Evans, who had been sidelined by knee injuries since that 31-30 win over Iowa State.

Texas defensive coordinator Vance Bedford told members of the media on Wednesday that Evans was given his first-ever start after a strong showing in practices. Before the game, Charlie Strong gave a new number to Evans – he switched from No. 29 to No. 1 – and Texas’ third-year coach said the other cornerbacks on the team were supportive of Evans in his return to the football field.

“He started because he earned that right,” Bedford said. “He’s a guy who has a chip on his shoulder. He’s come back from two major knee injuries on the same knee. To be out there, that’s called perseverance. That shows leadership, that shows mental toughness. Those are things that this program has been built on over the years, so he’s an example of what it means to be a Longhorn football player.”

Evans started across the field from sophomore Davante Davis against the Fighting Irish, but he was listed behind Davis on this week’s depth chart. Sophomore Holton Hill is expected to start at the other cornerback position in Saturday’s game against UTEP.