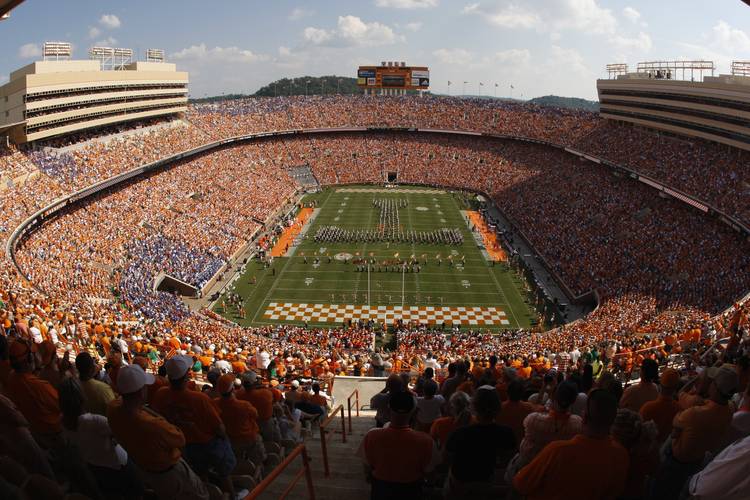 General view of the interior of Neyland Stadium before the game between the Florida Gators and the Tennessee Volunteers on September 20, 2008 in Knoxville, Tennessee. (Photo by Streeter Lecka/Getty Images)

However, RideAustin‘s latest promo ad doesn’t seem to think so. In fact, it looks like the local non-profit transportation network company has a case of mistaken UTs.

RideAustin seems to have a thing for the other UT, the one located in Knoxville, Tenn. That UT, home of the Volunteers, barely managed to beat Appalachian State 20-13 in overtime.

That season opener was played in UT’s Neyland Stadium, which holds more than 100,000 people. Many of those Vols fans dress in orange and white for games (much like Texas), only they do it according to the checkered seating patterns in the stadium, as shown in RideAustin’s Facebook cover photo:

That Facebook cover photo was uploaded to the social media site on Sept. 2 with instructions to use the promo code “KICKOFF” for $5 off of one ride during the opening weekend of college football.

But an email sent out to RideAustin users Friday, Sept. 9 still uses the ad, despite this weekend being the second weekend of college football and, again, despite the fact that the University of Tennessee Volunteers are not the Texas Longhorns.

The error appears to have gone unnoticed on the RideAustin Facebook page, except for one user, who commented Friday, “Cool picture of Knoxville’s stadium.”

The people of Twitter are picking up on the difference between Rocky Top and DKR, though:

Looks like someone at #RideAustin googled "UT Stadium" and didn't check if it was the right UT, whoops! pic.twitter.com/mAfQVBnJUT

Do the folks running RideAustin not live in Austin? Because this is the University of Tennessee's stadium… pic.twitter.com/iIi0wKZ4c8

The Eyes of Texas are upon you, even on the internet.

The Longhorns’ next game is this Saturday, at 6 p.m. at Royal-Memorial Stadium . In Austin.