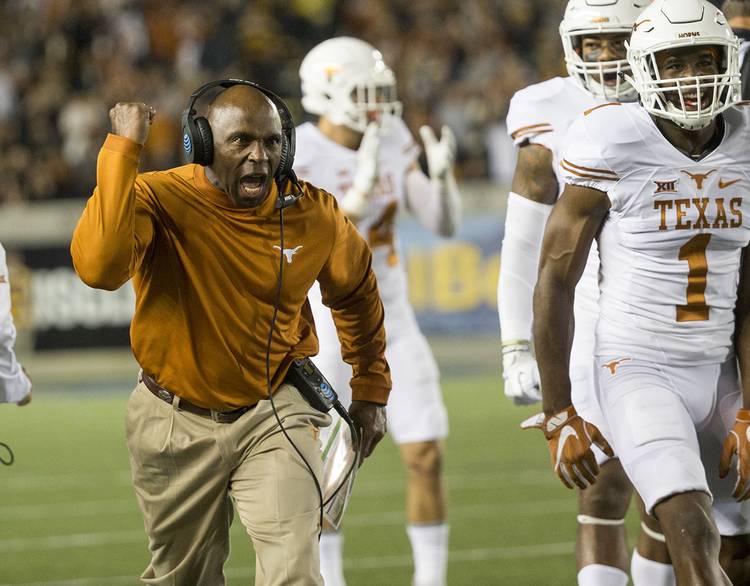 After Cal scored just six plays into the game, Texas answered with an 84-yard drive to show the Bears they weren’t going to wilt in their first road game.

With Texas clinging to a 3-point lead late in the first half, Brandon Jones blocked his second punt in as many weeks, this time giving the Longhorns a safety and 33-28 lead.

Texas’ run defense stifled Cal’s ground game, holding the Bears to 111 yards and only a 2.8 yards-per-carry average. Not that Cal was that interested in running the ball.

Shane Buechele left the game with a chest injury in the first quarter and sat out three straight offensive drives. He returned and played well, but threw an interception when he failed to spot the Cal safety on a bomb to John Burt.

Senior cornerback Sheroid Evans got burned twice for first-half touchdown passes, both times beaten by Cal top receiver Chad Hansen. On the first one, he let Hansen run right by him, thinking he had help deep. That was a 38-yard gain to Texas’ 5-yard line. On the second, he just couldn’t prevent a touchdown pass in the corner of the end zone.

Trent Domingue had been perfect on field goals through two games, but was wide right on long-distance tries before and after halftime on attempts of 53 and 49 yards.

With the score tied 43-43, Davis Webb found Hansen on an inside slant route in front of cornerback Kris Boyd for a 12-yard touchdown and the go-ahead score with 10:45 to play.

Cal’s defense rose up on Texas’ final possession, harassing Buechele. The freshman had one underneath pass route for a 1-yard loss, then sacked him on third down to force a punt with just over two minutes left. The Longhorns never got the ball back.