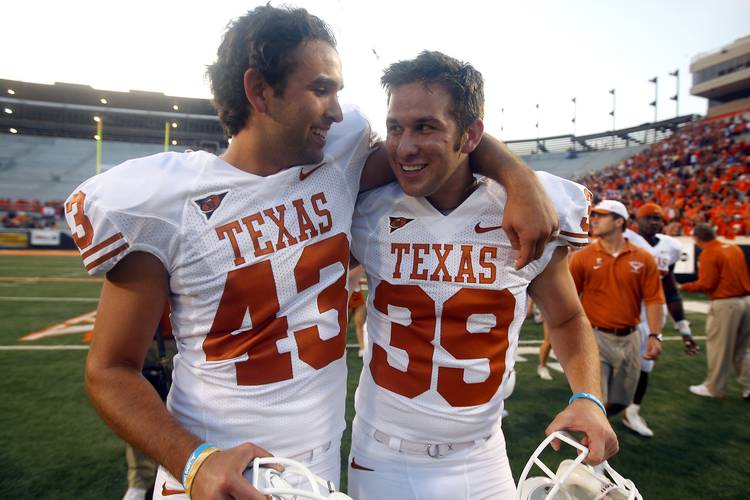 Since 1997, the Longhorns have taken eight straight from the Cowboys on their home field, a streak that puts the all-time series at 24-6 in favor of Texas. Despite winning four of the last six games in the series, Oklahoma State still hasn’t won one at home over that span.

The Longhorns can run the streak to nine this weekend, when they travel for an 11 a.m. kickoff at Stillwater. Here are some of the games to remember from the recent road dominance:

We shouldn’t even be having this conversation, if Oklahoma State had taken care of business back in 2007. The Cowboys led 35-14 heading to the fourth. Instead of packing up and going home, Texas handed the ball to Jamaal Charles.

After his three fourth-quarter touchdowns in a comeback win over Nebraska the week before, Charles scored on runs of 17 and 75 yards to lead the Longhorns back again. Ryan Bailey nailed a 40-yard field goal as time expired, the last of 24 unanswered points that all came in the fourth quarter.

No, not that one. Texas’ dream season hit a snag in Stillwater, where the Cowboys jumped out to a 19-point first-half lead and caused remotes around the country to tune to TBS for something other than an Atlanta Braves game or a sitcom rerun.

Then Vince Young set the Texas single-game record for total offense — later broken by Jerrod Heard — and the Longhorns scored 42 unanswered points to move one step closer to the Rose Bowl.

The “Law of Gus” was in full effect on Sept. 29, 2012, when sophomore quarterback David Ash led a last-minute drive for a dramatic 41-36 Texas victory. It was the third clutch drive of the second half for Ash, who won over a lot of fans with the performance.

Debilitating concussions were still a year away for Ash, and his retirement wouldn’t come for another year after that. For a brief moment, David Ash’s name was being screamed by Texas fans (and Gus Johnson) for all the right reasons.

Texas came to Boone Pickens Stadium in November 2014 still trying to secure bowl eligibility. It was a chilly night on the plains, but coach Charlie Strong came into the locker room and demanded the players to get rid of their tights and hand warmers.

It worked, as a 19-0 halftime lead provided all the warmth the Longhorns needed. Long before the 18-Wheeler, Tyrone Swoopes completed 24 of 33 passes for 305 yards, including a pair of beautiful touchdown throws to John Harris and Armanti Foreman.

The victory was the last of three-straight that ensured a sixth-straight bowl for Texas after a 3-5 start to the season.

The last of 13-straight wins over Oklahoma State may not have been close, but it sure was fun.

No. 3-ranked Texas poured on 21 second-quarter points and got pick-sixes from Curtis Brown and Earl Thomas, overwhelming the No. 14-ranked Cowboys. The win signaled the Longhorns’ dominance as they ripped through their final five regular-season opponents by an average of 26.6 points.