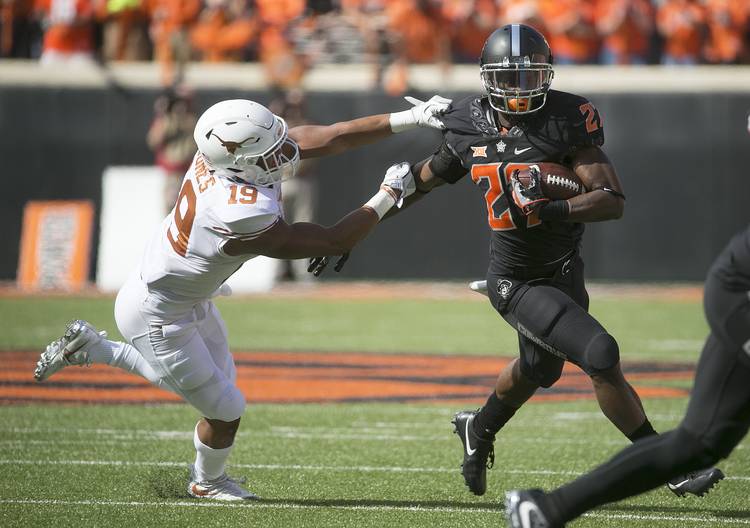 It’s over in Stillwater.

The Longhorns, once 2-0 but now 2-2, will drop out of the national rankings and are in a quick 0-1 hole in Big 12 play entering Red River Rivalry week against Oklahoma. And they’ve now dropped two straight games, both on the road. The defense continues to be spotty, and there are major concerns in the kicking game and coaching staff.

In other words, we’re pretty much in the same exact spot where we were at the beginning of October 2015, coming off a sobering blowout loss at TCU.

Those looking for signs of improvement from the Texas defense after its off week of soul searching didn’t get much of a show. Oklahoma State produced 555 yards of total offense, including a 392-yard passing day from Mason Rudolph. And don’t forget the missed tackles. There were so many, a surprising show of sloppiness especially considering the microscope that Texas’ defense was under.

Brandon Jones, Anthony Wheeler and Kevin Vaccaro all whiffed on Justice Hill on the freshman’s 30-yard touchdown run to start the day. Charles Omenihu let two sacks slip through his mitts. Davante Davis dropped an interception. Sheroid Evans missed at least two tackles, one on James Washington’s 54-yard touchdown play, another on a 28-yard catch and run by Chris Lacy.

The kicking game was horrid. Oklahoma State blocked three point-after kicks and Trent Domingue missed a 46-yard field goal try. It was a long day for deep snapper Jak Holbrook, a 5-10, 204-pound sophomore who looked overwhelmed by Cowboys defensive tackle Vincent Taylor, a 6-3, 310-pound junior, who was rushing up the middle and blocked at least two of those kicks, one of which was returned by Cowboys safety Tre Flowers for a 2-point run-back.

The offense started slow, then found its rhythm, then slipped a gear or two in the second half. This was Sterlin Gilbert’s best game in terms of utilizing D’Onta Foreman and Chris Warren III, who would alternate series and even sometimes spell each other during long drives. They wore the Cowboys down — until Warren went down with a right knee injury late in the first half and then Foreman went down with an non-contact injury to his  right side during a run. It left things up to Kyle Porter, the freshman from Katy who had only eight carries through the first three games.

Porter finished with 29 yards on seven carries, an average of 4.1 yards per run. He broke one 17-yarder. And yes, that means he averaged 2 yards per carry if you take away that 17-yarder. Foreman rushed for 148 yards and two touchdowns before his injury, on 17 carries. Warren had 10 carries for 106 yards before he left. Shane Buechele was 21 of 33 for 239 yards, with a touchdown and an interception. He didn’t wow anyone. He made only one bad mistake — a third-quarter interception deep in Longhorns territory, which led to a short Cowboys touchdown run. Buechele didn’t connect on any downfield passes, got most of his yardage on either short completions or longer gains that involved yards after the catch, but finished with a quarterback rating of 128.4.

Through four games, this is how this year’s defense compares to Texas defenses at the same point of the 2014 and 2015 seasons of the Charlie Strong era.

So far this season, the Longhorns have allowed 47, 50 and 49 points in three of their first four games.

This is how it all happened Saturday:

First quarter: OSU 16, Texas 13. One year after they combined for 20 first-quarter points, the Longhorns and Cowboys put up 29. Poor tackling doomed Texas as Justic Hill and James Washington shook nearly a half-dozen defenders on their respective scoring plays on OSU’s first two drives. Dorian Leonard’s 49-yard catch set up an 18-Wheeler touchdown run from Tyrone Swoopes, and it looked like the Longhorns would tie it after D’Onta Foreman’s fourth score of the season, but Trent Domingue’s extra-point kick was blocked and returned for a 2-point conversion.

Second quarter: Halftime. OSU 37, Texas 25. Cowboys quarterback Mason Rudolph used his arm and feet to lead OSU to three more touchdown drives — a 10-yard Rudolph run and a pair of Rudolph scoring throws to Jalen McCleskey (36 and 52 yards). Oh, there were two more blocked extra points. And Domingue missed from 46 yards after a delay-of-game penalty took away what would’ve been a 41-yard try. Of note in this quarter: Andrew Beck’s first career touchdown catch.

Third quarter: OSU 43, Texas 31. Injuries claimed some of the game’s best players. The Cowboys lost James Washington after the receiver was laid out by Malcolm Roach, and D’Onta Foreman went down with a possible oblique injury in the middle of a run. And that came after it was announced that Chris Warren III was lost for the game after a right knee injury late in the first half. The Cowboys scored on a Barry Sanders Jr. touchdown run, but the kick was blocked. Foreman scored on a 62-yarder before he was injured.

Fourth quarter: Final, OSU 49, Texas 31. With Foreman and Warren both out, things fell to Kyle Porter. He looked good at times, not so good at others. Buechele misfired on some third downs, and the Cowboys seemed content to settle on a pair of short field goals.

Texas was 7 of 17 on third downs. Oklahoma State was 7 of 15. The Longhorns had one turnover — the Buechele pick — and didn’t force any. Through four games, Texas is still looking for its first interception.

On deck: Oklahoma, at the Cotton Bowl, next Saturday, 11 a.m., Fox Sports 1. It just seems like this is the most important game of the season every year, for one reason or another. This year’s reason: Texas cannot afford an 0-2 start in the Big 12, and where this season ends up will probably spin out of how the Longhorns look and fare against the Sooners.