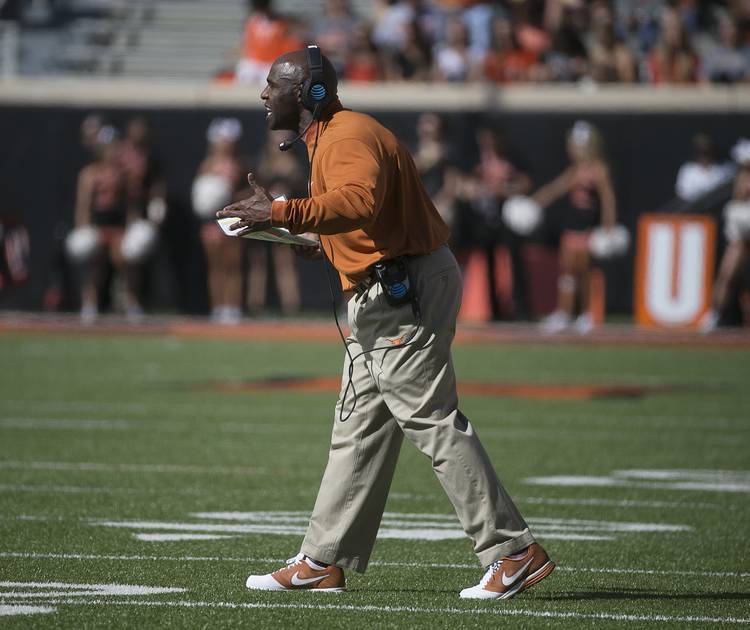 Charlie Strong’s regularly-scheduled Monday press conference has come and gone. And it was a big one:

Effective immediately, Strong is taking over the Texas defense. Defensive coordinator Vance Bedford is being demoted; he will now coach the secondary, working with defensive backs coach Clay Jennings.

Running back D’Onta Foreman probably will play Saturday. Strong said he looked good yesterday and that they expect to see him on the practice field later in the week. Let’s call him questionable for the Sooners. But Chris Warren III, who hurt his knee against Oklahoma State, is definitely out. Strong said they don’t know how long he’ll miss.

Strong took two minutes for his opening statement, and he got to the point quickly:

“We have not played well our last two games,” Strong said. “Our defensive performance … knowing we have a lot of talent on defense, we can play a lot better than we’ve played. It’s unacceptable. I’m gonna run the defense. I’m gonna call the defense. Bedford will coach the secondary. There are a lot of plays on the back end that we can get corrected.

“We know this: We’ve got to get better. We’ve got to show progress as a team. What’s great about this game, last year we were 1-4 going into this game. Records don’t matter. We need to play with poise, with a lot of condidence. If we get off to a good start and just relax, let things happen, it’s gonna be a really good day for us.”

If it’s the right move now now, why didn’t he make it last week after the bye? Does Strong have a sense that this season’s slipping away? Is he worried about his job security? Why should fans believe that Strong can actually fix this? How much change can you really make in just a few days before the Oklahoma game? How do you not lose the locker room? Shouldn’t Strong have seen warning signs that this defense was in trouble? And, with only one coach from his original 2014 Texas staff still in place, what went wrong with his assistants?

On why he didn’t make this move last week: “I just felt like at this time now it was a move that needed to be made. I know we had the bye week, and a lot of things we did different, some schemes we put in. I just felt right now I need to call the defense and get that done.”

On whether the season is slipping away: “I don’t think it’s desperate times, desperate measures. They understand what we need to get done. It’s not a big desperation. I know this: I’ve done it before and I can see where I can help us. Sometimes you need to breathe new energy into some of those guys and hope it will be a good move for them.”

On his job security: “We’re 2-2. Four games into the season. We still have eight games left. I told our guys, y’all just go play and let me handle everything else. What’s gonna be said is gonna be said. We were in a similar position last year; we went through the same things. I told them hey, you guys handle your business.”

On why he believes he can fix this: “You’ve got to have confidence. You’ve got to believe. We have talented players on defense. … Sometimes guys are pressing so hard. I tell them, guys, just go break on the football. In the open field with a wide receiver, you’ve got to go attack the wide receiver. When you freeze on a receiver, now you give him a two-way option. Those are things that can be corrected.”

On whether he thinks fans should think he can fix this: “I hope and believe that they think I can.”

On what he can do to not lose the locker room: “There’s still eight games left; we can still make a lot of noise. We are just as talented as anybody in this conference. We can go score on offense, we just need to get some stops and turnovers on defense and we’ll be fine. Let’s not just sit back and watch it fade in front of us. It’s all there in place for us.”

Those were the highlights. Strong was asked about the three blocked kicks and said there wouldn’t be a change at deep snapper. He disagreed with a question on whether the 18-Wheeler package was being overused (“I love that package”). He fielded a couple of questions about Oklahoma, citing the keys to Saturday’s game as not giving up a big play in the passing game, not allowing Baker Mayfield to improvise outside the pocket, and to slow down Samaje Perine and Joe Mixon.

Saturday’s game kicks off at 11:05 a.m., on Fox Sports 1. Texas holds a 47-38-4 all-time record against Oklahoma since the game was moved to the Cotton Bowl in 1929. But the Longhorns and Sooners have split the last 10 matchups.