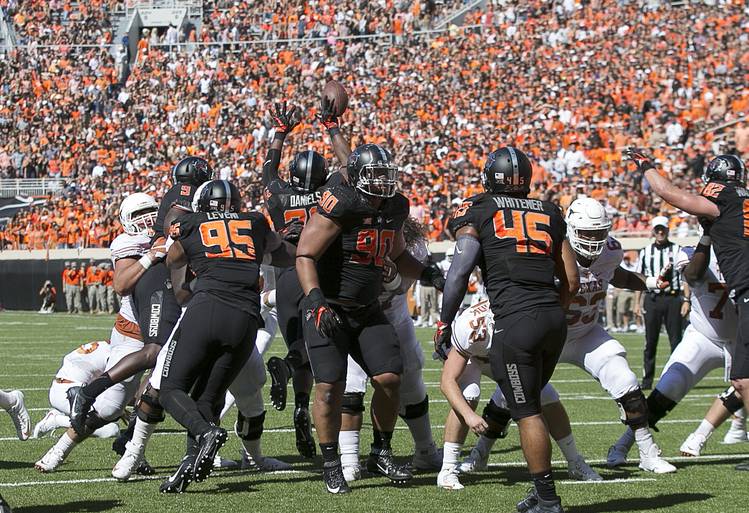 Two days after Oklahoma State blocked three extra-point attempts in the first half of a 49-31 win over the Longhorns, more blame was placed on Texas’ scheme than its personnel.

Both after the game and at Texas’ press availability on Monday, Oklahoma State was credited with successfully overloading the middle of the Longhorns’ offensive line on the extra-point attempts. When the nearest guard attempted to engage with one of the oncoming Cowboys, that left 204-pound deep snapper Jak Holbrook as the last line of defense. The 310-pound Vincent Taylor blocked two kicks as a result, and the 305-pound Darrion Daniels swatted another attempt.

Strong told media members that he will not replace Holbrook, a 2014 graduate of McCallum. Freshman Michael David Poujol is listed as Holbrook’s back-up on Texas’ depth chart, but Strong referred to his sophomore starter as the “only snapper we have that can snap.” Strong added that starting center Zach Shackelford was not a deep snapper.

Strong also said that “We’ve got to get a good operation time, get the ball down and get the ball kicked. We just can’t sit there and hold it.” Since Texas attempted a two-point conversion following the only touchdown it scored in the second half of the Oklahoma State game, only time will tell if it has fixed this problem.

Although it is keeping its extra-point unit intact, Texas made some official edits to the depth chart it revealed on Monday.

Listed below are five starters who did not appear atop the depth chart that Texas released to the media at the Oklahoma State game (a sixth starter – offensive lineman Kent Perkins – was suspended). Even though they weren’t listed as first-stringers on the depth chart last week, all five of these players started in the 49-31 loss: