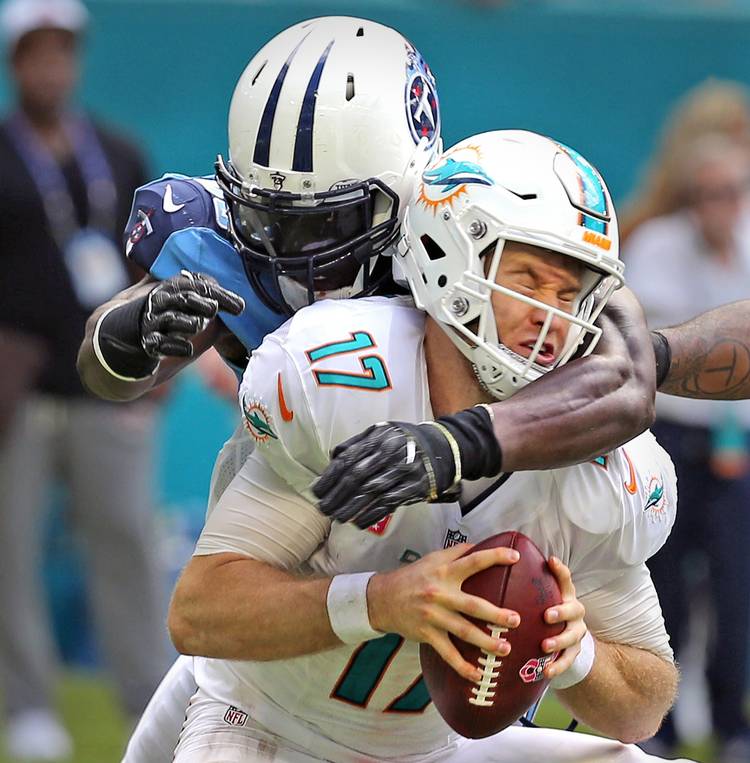 Brian Orakpo, LB, Tennessee—Orakpo continued his great play on Sunday, adding two more sacks to his total. He’s third in the league with six sacks on the year and has recorded a sack in four straight games.  His career high of 11 sacks in a season, recorded in his rookie year, is in serious danger. He was second on the team in tackles as the Titans defeated the Dolphins 30-17 this week. He had six tackles to go along with three tackles for loss and two quarterback hits.

Malcom Brown, DT, New England—The 22-year-old had four tackles and two sacks as the Patriots thumped the Browns 33-13. He’s now two-thirds of the way towards his sack total from last season.

Quandre Diggs, CB, Detroit—The Lions halted a three-game losing streak as Diggs contributed five tackles in the win over the Eagles. He played in about 60% of the defensive snaps.

Alex Okafor, LB, Arizona—He had three tackles, a half-sack and contributed on a tackle for loss. It was his most productive game of the year so far.

Marquise Goodwin, WR, Buffalo—He and Robert Woods were the top targets for the Bills in their win over the Rams on Sunday. Goodwin had just two catches for 13 yards, but he managed to get in the end zone on a six-yard score to seal the win in the final quarter.

Michael Griffin, S, Carolina—He played in over half the defensive snaps, but was third on the team in tackles. He had five stops to go along with a half tackle for loss.

Keenan Robinson, LB, N.Y. Giants—Robinson made four tackles and defended a pass in the third straight loss for the Giants.

Jordan Hicks, LB, Philadelphia—Hicks had five tackles as the Eagles fell to the Lions on a last second field goal. It was the most tackles Hicks has had this season.

Phil Dawson, PK, San Francisco—Dawson went 3-for-3 on extra points in Thursday’s 33-21 loss to the Cardinals.

Sam Acho, LB, Chicago—Acho made two tackles in the Bears’ 29-23 loss to the Colts. He played in 87% of the defensive snaps for the Bears.

Hassan Ridgeway, DT, Indianapolis—He had just one tackle in the Colts’ win over the Bears. He didn’t start but played in about 30% of the defensive snaps.

Justin Tucker, PK, Baltimore—Tucker remained perfect on the year, in terms of kicking anyway. He wasn’t quite as good throwing the football on a fake field goal. He connected on a 31-yard field goal and added an extra point in the 16-10 loss to the Redskins. As for that attempt at a fake, they probably tipped their hand by lining him up as a lefty kicker.

Aaron Williams, S, Buffalo—Williams made two tackles in the Bills’ 30-19 win over the Rams. He started the game and played in 91% of the Bills’ defensive snaps.

Earl Thomas, S, Seattle—Thomas and the Seahawks were off in Week 5 and face the Falcons on Sunday.

Jamaal Charles, RB, Kansas City—It will be interesting to see if the bye week helped Charles return to full throttle after being very limited in his return from injury during Week 4.

Derrick Johnson, LB, Kansas City—The Chiefs were off and get back in action at Oakland on Sunday.

Malcolm Brown, RB, Los Angeles—Brown got his first touches since the first week of the season as he had two carries for two yards and one reception for 26 yards.

Fozzy Whittaker, RB, Carolina—He continues to make the most of his touches, however few they are. He had five rushes for 45 yards and one catch for nine yards in the 17-14 loss to the Buccaneers.

Roy Miller, DT, Jacksonville—Miller was on bye this week. He faces the Bears on the road on Sunday.

Geoff Swaim, TE, Dallas—Swaim played in 40% of the offensive snaps and was targeted just once as the Cowboys defeated the Bengals 28-14.

Chykie Brown, CB, Cincinnati—Brown didn’t get any playing time in the Bengals’ loss to the Cowboys.

Adrian Phillips, S, San Diego—Phillips didn’t register a stat and played in about half of the defensive snaps in the Chargers heartbreaking 34-31 loss to the Raiders.

Kenny Vaccaro, S, New Orleans—Vaccaro and the Saints were off this week and are getting ready to host the Panthers on Sunday.

Donald Hawkins, OT, Carolina—He was in on just one offensive snap this week.