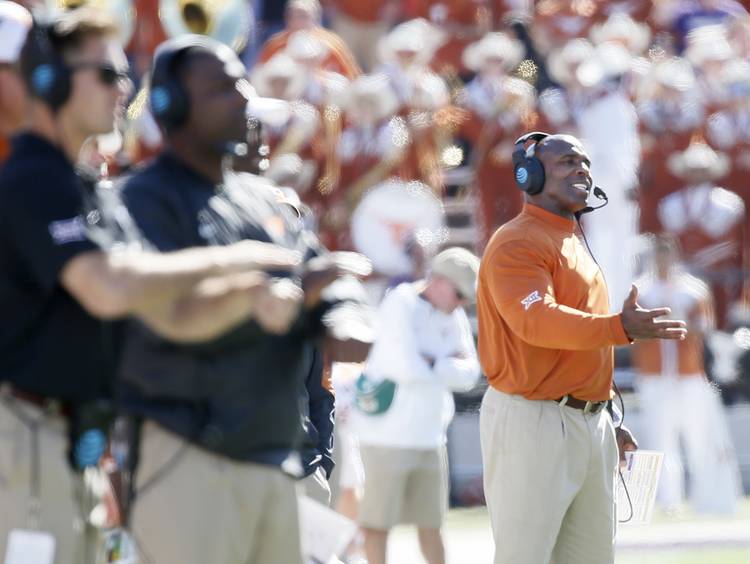 In today’s Golden’s Nuggets, Cedric touches on a couple big Bevo-related items: Here’s what he had to say about this week’s “crossroads” matchup with Baylor:

It’s become a cliché to say that Saturday is a crossroads game for Texas.

But we’re at that point where every game takes on added significance as Charlie Strong’s seat gets hotter. But amid the Longhorns’ overall struggles comes some real compliments.

From Waco, of all places.

The Horns are fresh off their latest road disappointment, but the Baylor Bears are more than respectful when it comes to the offense Texas has put on the field. Now be advised that Baylor leads the Big 12 in three of the four major defensive categories. Is that a sign of the apocalypse? Not sure, but the numbers are the numbers.

More important, if anyone is equipped to speak on the Texas offense, it’s Baylor, which provided the blueprint for Texas offensive coordinator Sterlin Gilbert, who served as a graduate assistant under former Baylor coach Art Briles when he was at Houston in 2005.

Briles’ replacement, Jim Grobe, didn’t go as far as to say Gilbert went “Command-C, Command-V”with this offense, but the similarities are obvious from the running game to the passing attack to the quick tempo.

“Absolutely,” Grobe said. “I wouldn’t necessarily say that it’s just Texas. I think that’s a trend at a lot of programs now is to try to pick up the pace, make defenses adjust as much as you possibly can and make them adjust on the fly. And that’s what we see out of a lot of teams now. It’s not just the Bears running this stuff, the teams we play against, and we’ll see it throughout the rest of the season, teams that like to get the pace going.”

The biggest difference has to be the overall disparity in win-loss record, some of which can be attributed to Texas playing a much stronger non-conference schedule along with its obvious struggles on defense.

You don’t hear this every day, but the Horns need to be more Baylor-like on defense Saturday.

For the rest of Cedric’s Nuggets, including his thoughts on the Kansas State game and the Aggies’ game versus Alabama, click here.