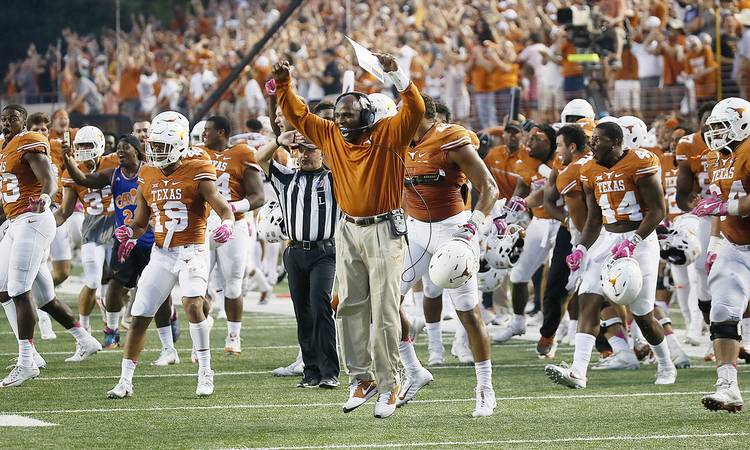 It’s all over at Royal-Memorial Stadium.

The Longhorns, needing six wins to become bowl-eligible, are at four. They need to find two more in the four remaining games against Texas Tech (Lubbock), West Virginia (DKR), Kansas (Lawrence) and TCU (DKR) to get there.

As far as Strong’s job status, there have been two schools of thought. One has Texas needing to go 7-5 with a reasonably good bowl game for it to be considered safe to say Strong will be back. The other has Texas needing to go 8-4 to make that a slam dunk decision for Texas. He’s notched wins over the No. 10 and No. 8 teams in the country this season.

The Longhorns are now 4-0 at home.

Texas hung tough for a half, taking a 23-21 lead at the break thanks to a big first two quarters from D’Onta Foreman and a spirited showing by the much-maligned Texas defense. The Longhorns, matched up against the nation’s No. 4-ranked total offense, produced one turnover, two sacks and a safety in the first half.

But things changed in the third quarter. Texas looked sluggish on offense and, after back-to-back 10- and 13-play drives that yielded a Baylor field goal and a touchdown, tired on defense.

But Texas found a way to pull it out in the fourth, getting hot late after playing cold early.

After the Bears took the lead (28-26) for the first time since going up 7-0 after the first drive of the game, Texas answered with a three-and-out.

When the Bears added a field goal on their next drive, going up 31-26, Texas answered with a three-and-out.

Texas’ first four drives of the second half:

Texas, now trailing 34-26 midway through the fourth quarter, went on the offensive. The Longhorns put together a six-play, 79-yard drive keyed by Lorenzo Joe’s 61-yard catch to Baylor’s 13. Buechele found Andrew Beck for a 7-yard touchdown with 7:03 left in the game, though the 2-point play to tie it up was stopped short.

The Bears tried to produce a clock-chewing drive and points to seal the game, but a Bryce Cottrell sack and a couple of Russell incompletions forced a Baylor punt with 3:10 to go.

Texas, trailing 34-32, started its drive at the 20. Foreman rushed for 4, then spit through the middle for a 12-yarder to Texas’ 36. Buechele then lofted a pretty pass to Armanti Foreman in front of the Texas sideline for 38 yards to Baylor’s 26.

With 2:21 to go, the Longhorns needed to eat some clock. Foreman for 3. Then Foreman for 5. On third-and-3 with 1:15 to go, and at Baylor’s 19, though, Texas went with the 18-Wheeler; Tyrone Swoopes, though, ran wide right and lost three yards.

That set up Trent Domingue, from 39 yards out on the right hash mark, with 50 seconds left.

Why No. 8 Baylor (6-1, 3-1) lost: Where was the defense late in the game? And surely the Bears knew Foreman was coming today. Didn’t matter. Settling for two short field goals in the third and fourth quarters hurt the Bears at the end.

Saturday morning, we asked four questions ahead of today’s game. Here’s how they played out:

Did Devin Duvernay get more than one look this week? Yes. He finished with only one catch for 2 yards, though. But he was targeted at least three times.

His touchdown string, however, came to an end at three games. He had a 63-yard touchdown catch vs. OU, a 75-yarder against Iowa State and an 80-yarder at Kansas State.

Did Texas finally give Baylor a test at least? Yes. Big-time.

2. The turnovers. Huge. And scoring off those turnovers was even bigger.

3. Armanti Foreman had four catches for 142 yards and a touchdown.

1. Where was Patrick Vahe? He had zero snaps.

2. There were questionable play-calling decisions throughout, none moreso on the late 2-point play from the 2 that saw Swoopes stopped short and D’Onta Foreman lined up at receiver.