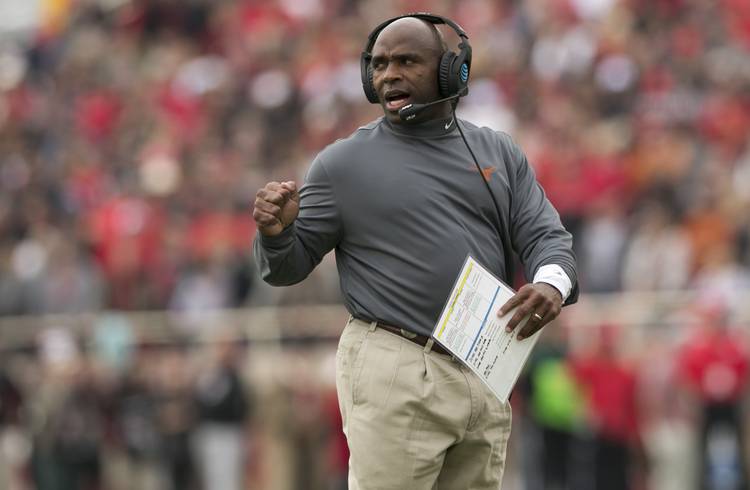 Earl Campbell loves him some D’Onta Foreman and said he sees a lot of himself in the junior running back, but he also wishes Texas would publicly announce it’s bringing Strong back next season. Asked if the football program is taking off on our “On Second Thought” podcast that airs Thursday, Campbell said, “I really do. I think they need to let coach Strong know you’re going to be here and get it done and stop all this guessing about who we’re going to get. If we get rid of coach Strong, who in the hell are we gonna get? We need to stick with the horse we’re riding now. It’s gonna be a great horse in Charlie Strong.”

One notion that’s floating around the Texas administration is that President Gregory L. Fenves has already decided to give Charlie Strong another year for a variety of reasons, no matter if the Longhorns lost to TCU and their bowl opponent. A loss to Kansas would shatter that thinking, however. But one large reason to bring Strong back is there’s not a slam-dunk hire of a replacement, not even Tom Herman, who gets mixed reviews from some influential parties. Fenves is thought to want to give Strong at least one year with his recruits as upperclassmen and provide offensive coordinator Sterlin Gilbert with a second season. Not to be dismissed as factors are the solid support for Strong from players and their parents and the perception that Texas didn’t give its first African-American head coach sufficient time to build a program if it fires him.

On one Texas wide receiver possibly playing for Shaka Smart:

If Shaka Smart really needs some help with his young basketball team, he knows where to call. Texas wide receiver Dorian Leonard has already pleaded with him for a chance on the hardwood. “Yeah, I’ve already asked if I can get coach Strong to let me walk on to the basketball team next year,” Leonard said. “Basketball’s my first love.” Leonard said he averaged about 12 points a game as a junior at Longview and 18 points as a senior and very nearly considered focusing on a basketball career. At one point, he said he dropped football totally and was dismayed when his high school football coaches tried him out at defensive end. He said he talked to LSU about a basketball opportunity and considers himself the top hoops guy on the football team. “I think I’m the best one on the team,” said Leonard, who likes Tyrone Swoopes, Jacorey Warrick and even Paul Boyette Jr. on the basketball floor.

For the rest of Kirk’s 9 Things, including his thoughts on Texas baseball, the Texas Sports Hall of Fame inductees and what former NFL running back is a D’Onta Foreman comp, click here.