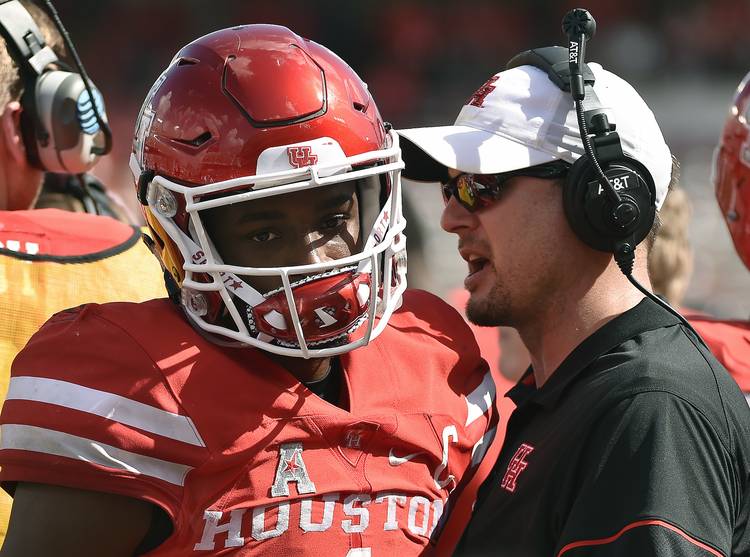 Houston head coach Tom Herman, right, talks with quarterback Greg Ward Jr. after Ward threw his third interception of the game during the first half of an NCAA college football game against Central Florida, in Houston. No. 3 Louisville (9-1) is in the hunt for a spot in the College Football Playoff as the Cardinals prepare to face Houston (8-2) on Thursday night, Nov. 17. (AP Photo/Eric Christian Smith, File)

LSU has reportedly hired its interim head coach, promoting Ed Orgeron to the full-time position and clearing the way for Texas to pursue Tom Herman to become the new Longhorns head football coach.

Both The Advocate in Baton Rouge, La., and footballscoop.com reported that LSU had agreed to give Orgeron the job and said the school will hold a press conference at noon Saturday.

Texas has not officially fired its football coach, Charlie Strong, but that is expected to happen Saturday morning when school president Gregory L. Fenves makes an announcement. Herman was the top candidate for the Texas job all along after going 22-4 at Houston the last two seasons.

The Longhorns completed their season Friday night with a 31-9 loss to TCU. Strong basically gave his farewell speech in his post-game address, but no official word has been put out.

As far as the salary that it would take to attain Herman’s services, here’s an update:

I'm told it could take $6 million a year to sign Herman at Texas. Also hear that Oregon is kicking the tires on Alabama OC Lane Kiffin.