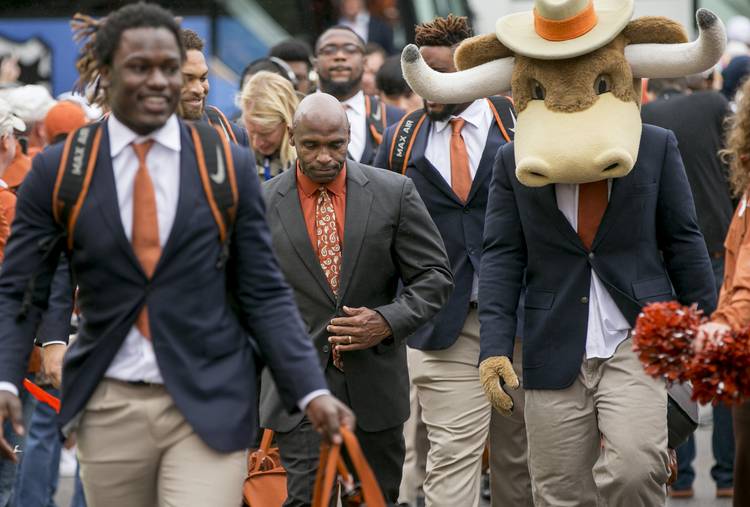 On Saturday morning, Charlie Strong lost his job as the football coach at the University of Texas.

Strong, who is expected to be replaced by Houston’s Tom Herman, went 16-21 during his three seasons in Austin. Texas was 12-15 in Big 12 play under Strong, and his time with the Longhorns was capped by yesterday’s 31-9 loss to TCU. Here are 10 notable numbers for Strong’s three-year run:

16: Strong won 16 of his 37 games at Texas, and that .432 winning percentage ranks last among the 29 men who have coached the Longhorns (at 13-14-2, Chevingny was the only other coach to leave the 40 Acres with a losing record). Strong, though, will exit Texas with more wins than 14 of his successors… but he is still a long way off from Darrell Royal’s 167 victories.

Charlie Strong is now 53-36 over seven seasons at Louisville and Texas. He also lost a game as an interim coach at Florida in 2004. pic.twitter.com/QDkLkuRWl7

53: A 45-37 win over Texas Tech on Nov. 5 was Strong’s last at Texas and 53rd as a head coach. Strong leaves Austin with a .589 winning percentage in a career that has technically included stops at three schools (Texas, Louisville and Florida).

11: Texas made four appearances in the Associated Press’ national poll during Strong’s tenure. The Longhorns had a two-week stay at No. 11 following this year’s double-overtime win over Notre Dame, but the team stumbled to No. 21 and No. 22 following a 50-43 loss to California. Texas also appeared in the Amway Coaches Poll in 2014 and 2016.

In three years at UT, Charlie Strong posted a 10-8 record at home. He was 5-9 in true road games and 1-4 at neutral locations (1 bowl game). pic.twitter.com/Mx5rYhfk6Q

10:  Strong earned 10 of his wins at Royal-Memorial Stadium, the first of which was a 38-7 triumph over North Texas in his debut on Aug. 30, 2014. The Longhorns, though, struggled away from home, and the team was just 6-13 outside of the city limits. One of those losses was picked up in Texas’ only postseason appearance with Strong, a 31-7 loss to Arkansas in the 2014 AdvoCare V100 Texas Bowl.

5: While Strong was on the sideline, Texas beat teams that were ranked eighth (Baylor), 10th (Oklahoma and Notre Dame), 12th (Baylor, again) and 24th (West Virginia) in the AP’s poll. The Longhorns, though, were also beaten 10 times by a nationally-ranked team with that last defeat being a 24-20 loss to No. 11 West Virginia on Nov. 12.

59: Texas scored 26.4 points per game under Strong, and the Longhorns put up a tenure-high 59 points against Kansas in 2015. Strong, though, presided over shutouts by Iowa State and Kansas State. Strong employed four offensive coordinators, but the offense improved each year (21.4 PPG to 26.4 PPG to 31.9 PPG).

1: Texas posted only one shutout under Strong, who was the co-defensive coordinator on Florida’s 2007 title team. Texas allowed 28.4 points per game over the past three seasons, and TCU and California both hit the 50-point mark. Strong took over play-calling duties after Texas’ fourth game this season, and the Longhorns allowed 28.1 points per game the rest of the way.

3: Strong presided over three signing days, and each of his recruiting classes were top-20 hauls according to 247Sports. Texas’ 2017 recruiting class currently has only seven members, and it is ranked 61st by Rivals and 73rd by 247Sports.

6: Strong coached six players who were taken in the NFL Draft, and that number will increase over the next few drafts. Defensive tackle Malcom Brown, linebacker Jordan Hicks, tight end Geoff Swaim and defensive backs Quandre Diggs and Mykkele Thompson were drafted in 2015, and defensive tackle     Hassan Ridgeway was selected by Indianapolis this past spring.