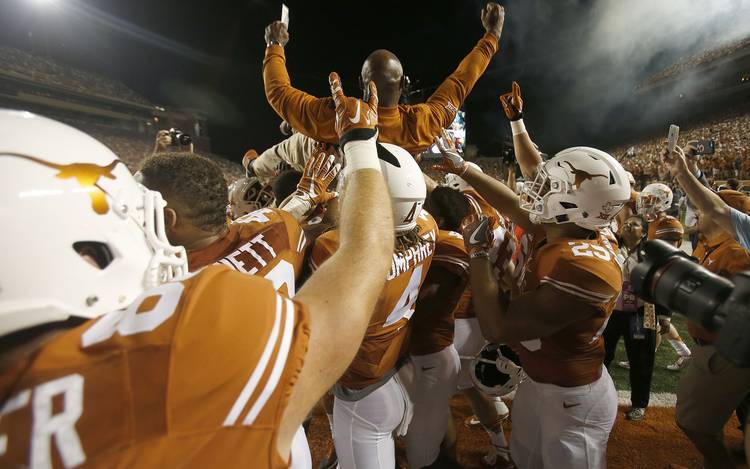 The University of Texas announced on Saturday morning that it had fired Charlie Strong, who has led the school’s football program for three seasons. Strong went 16-21 with the Longhorns.

Texas football players showed up to support their embattled coach at a press conference earlier this week. As news of his firing spread this weekend, those players took to Twitter to express their feelings:

This man gave me a shot when nobody else wanted me. Has helped me grow as a football player and a man. Don't know where I would be w/o him. pic.twitter.com/NNHfKqpx7o

Words can't describe how thankful I am to have played for you, you've set the foundation to something great and we have finish it. #Thankyou pic.twitter.com/VyLaCDRgB8

Thank you for everything @Strong_TexasFB #believe

Thank you for everything Coach Strong.

Chuck gone bounce back wherever he goes

@Strong_TexasFB father figure. Thank you boss. Always ride or die for you !

"The cake has been made now just put the sprinkles on it" -Strong🤘🏾 Thanks for giving me this opportunity❤️ #StrongEra pic.twitter.com/h30hQmE36b

it was more than football with him..

Wishing coach strong the best. Thanks for everything

Thank you for everything Coach Strong! #StrongEra

Thanks for everything! Love you Coach Strong. pic.twitter.com/8ZV3OMV8gl

-It was a process and I enjoyed it! Can't believe this is happening to you. Thank you for being a father figure
🤘🏽❤️ pic.twitter.com/pLpTiFsw89

I'm reppin' Texas with you. you helped me develop outside of football because we are not just football players! #CoachStrong 🤘🏽

Thank you for everything @Strong_TexasFB