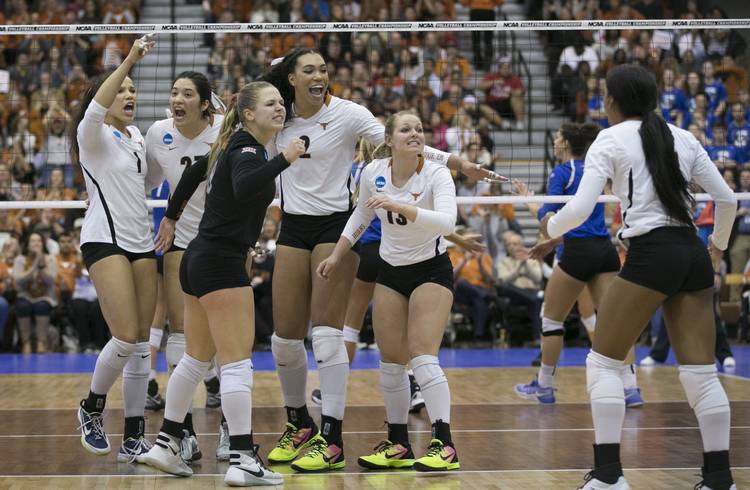 UT's Micaya White, from left, Yaasmeen Bedart-Ghani, Cat McCoy, Ebony Nwanebu, Autumn Rounsaville, and Chloe Collins celebrate a point in the third set against Creighton at the regional round of the 2016 Division I Women's Volleyball Championship at Gregory Gym on Saturday December 10, 2016. JAY JANNER / AMERICAN-STATESMAN

Ebony Nwanebu and Micaya White’s debuts at Texas were delayed for a year, but both were worthy of national acclaim.

White and Nwanebu have been placed on the first team of the American Volleyball Coaches Association’s Division I All-America team. White, a redshirt freshman, was honored as an outside hitter, while Nwanebu, a junior, was one of three right-side hitters on the first team.

Nwanebu is averaging 4.06 kills per set, and she boasts a Big 12-best .384 hitting percentage. This is Nwanebu’s second appearance on the AVCA first team as she was honored in 2013 during her freshman year at USC. Nwanebu transferred to Texas in 2015 after spending two years in California, but she was sidelined by a back injury after that season’s first game.

“I really don’t know how to explain the feeling,” Nwanebu said at a NCAA press conference in Columbus, Ohio on Wednesday. “I never thought I’d get back to playing at this level. Coming off an injury, I accepted the fact that I would never be like I was my freshman year. To be back to that form is a great feeling for me.”

White missed all of the 2015 season with a leg injury. This year, she hit .274 while leading Texas in kills (455) and kills-per-set (4.06). A six-rotation player, White also had eight matches in which she recorded double-digit kills and digs.

“I had great trainers and strength coaches, (who) got me back into shape,” White said. “Ebony has been there with me. We were training room buddies, we’ve helped each other out, she’s been like an older sister to me.”

A Nebraska team that will meet Texas in the national semifinals on Thursday had four of its players honored on one of the All-America teams. Kansas junior Kelsie Payne, who hails from Connally High, was recognized on the first team for the second straight year.