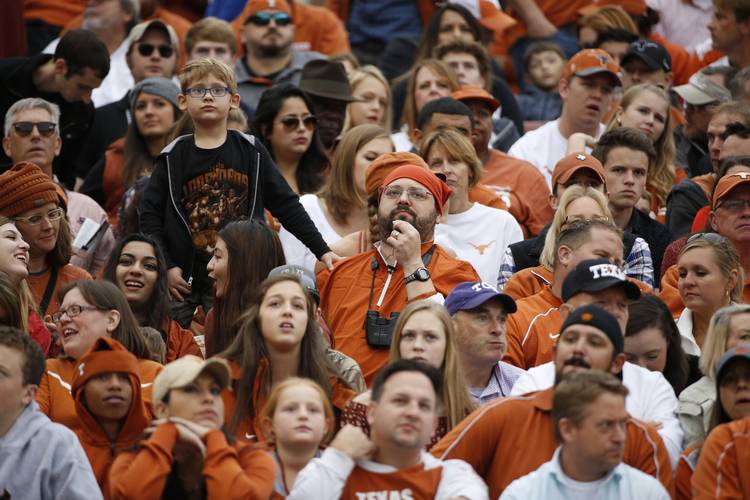 Oh, my. The bad car wreck that slows traffic down of a season the Longhorns had in 2016 produced many terrible moments of football futility. The program even had to change every coach, including the head coach, after the season. It was not pretty.

And thus Texas fans, when the going gets tough in the future, you can pull up this article and remember this: It could be worse, it could be 2016.

Here are the 10 worst moments of 2016 Longhorn football:

10. Almost no one watched the Red River Showdown this season outside of Texas and Oklahoma people

Maybe it’s because people don’t know what to call it. Is it the Red River Rivalry? The Red River Shootout? The Red River Showdown? How about the “Red River No One Cared in 2016” game. Despite Texas still filled with hope and Oklahoma still ranked, the annual matchup in the Cotton Bowl drew the lowest rating since hey day of the Baha Men letting the dogs out. The 2.0 overnight TV rating was the lowest since 2000. What’s weird is the game wasn’t that bad, with the Sooners winning 45-40.

9. That time Tyrone Swoopes played running back instead of the guy who rushed for 2,000 yards.

Texas beat No. 8 Baylor 35-34 in November. It looked like Charlie Strong was turning the corner with a month  left, I guess, and yeah, this was a good week. But as Kirk Bohls wrote, “That said, (offensive coordinator Sterlin) Gilbert’s game against Baylor — like seemingly every play Saturday — under review.”  The biggest one was the time quarterback Tyrone Swoopes played running back in place of D’Onta Foreman. See, Foreman rushed for 250 yards against Baylor, and Texas actually lost a lead and needed a field goal to win, so Swoopes playing running back at any point in the game made fans furious. Oh, and he fumbled on one of the handoffs. Fans were already furious because a great deal of Texas fans still had no idea why the 18-Wheeler Package was still a thing in 2016, let alone whatever a Buechele, Swoopes dual backfield was called.

8. Maybe Swoopes playing running back was because Chris Warren missed, like, the whole season

Yeah, No. 9 was a result of Chris Warren getting hurt. It’s a catch-22 scenario. The greatest thing about the Longhorns’ season is just how awesome D’Onta Foreman played. Breaking Earl Campbell’s 100-yard rushing game streak, going over 2,000 yards rushing and winning the Doak Walker Award. Does Foreman accomplish that if Warren was healthy and taking snaps away from him? On the other side, Texas was so thin at running back that Sterlin Gilbert gave Tyrone Swoopes carries, Foreman was so overused in that Kansas game you can hardly blame him for the costly fumbles (he set a school record for carries in a game). Where was Chris? Chris suffered a knee injury against Oklahoma State and never returned.

Texas somehow believes that a player who played in about 3.5 games this season could be awarded a medical redshirt, which means Texas may suffer its next big defeat when the NCAA laughs at them on that request.

OK, OK, we’ll stay hopeful that Unicorns exist, Atlantis fell into the sea and Chris Warren will still be a sophomore next season because, you know, Herman! (Note: it was a long season).

7. Speaking of the Oklahoma State game, remember when Charlie Strong phoned a friend, and that friend was the official, on that one call

It was the third quarter, Oklahoma State was called for an illegal man downfield after a completed pass in Texas territory. Texas coach Charlie Strong declined the penalty. The officials then went to Charlie, chatted for a second and “helped him out,” said the ABC broadcasting crew. Charlie accepted the penalty, and Texas would go on to lose the game (not because of this event though). Yes, the Big 12 Officials, the same bumbling group of misfits that are mocked on a daily basis by anyone who watches the league every Saturday, gave Charlie an assist on a call.

6. That time Dana Holgorsen told everyone what he thought of Texas

Uh, Dana Holgorsen didn’t know the referee’s mic was on. And he let it rip. West Virginia won 24-20. What’s more is this game also featured an epic fail by Fox Sports 1 and the network’s ability to count. We’ll leave out the part of Tim Cole’s father suffering a heart attack before the game (he’s OK now!) and just say that this was not the best day for Texas football.

5. Remember when Texas had a 2,000 yard rusher, and Michigan had the Big 10’s 30th leading tackler, but the Michigan guy was a Heisman finalist?

Look, we get it. D’Onta Foreman’s team was not good. They were sub .500 and lost to Kansas. We understand. But Foreman rushed for 2,028 yards and 15 touchdowns. He averaged 6.3 yards per carry. He averaged 184.36 yards per game. He even had an offensive coordinator that sometimes forgot about him in games. Jabrill Peppers was invited to New York City. The Michigan linebacker had 72 tackles, making him tied for 30th in his conference. He played 15 positions and had 933 snaps. Many people lauded him for this versatility.

But Nic Cage starred in five movies in 2016, and we’re sure he was creepy and good in all of them, but he won’t be invited to the Oscars this season (we’re guessing on this, we didn’t see any of his movies, including “Dog Eat Dog”). Peppers could be a better pro. Peppers could be drafted higher. Peppers was on a better team. Peppers’ team didn’t lose to Kansas. But Peppers had no business being invited to New York over D’Onta Foreman.

4. The California game and the case of the broken door

True Austin American-Statesman story: The Longhorns, playing in California, played super-late according to Central Standard Time, and the game didn’t end until the wee-hours of the morning. Texas was ranked No. 11  before the game. Then Cal scored 50 points and shattered Texas fans’ hopes of a national championship (yeah, I kind of chuckled to). Well, at the same time, in the Statesman’s lobby, one of the glass doors  just mysteriously shattered. The whole thing, a million little cracks. Broken. Security tape showed that it just happened. No one did anything to it.

My belief: the tremors of Cal’s offense reverberated all the way back to Austin and shattered the door. The rest of the week we had caution tape around the door and we needed to get it replaced. Also in related news: Texas replaced its defensive coordinator, Vance Bedford, a few weeks later.

3. Pretty much every minute of the TCU week

Following a loss to Kansas, Texas returned home and on Sunday and reports surfaced that Texas was planning on firing Charlie Strong. I mean, he lost to Kansas. But Texas denied it. Brian Davis and Kirk Bohls reported it, and stuck by it. The next day Charlie Strong held his scheduled press conference. Players showed up and were emotional, they looked like they wanted their coach back. The Statesman and other outlets stood by their reporting. Then LSU reportedly tried to hire Texas’ top target, Tom Herman. Then reports started changing that it would take a blowout over TCU for Strong to stay the coach. Then LSU hired someone else not named Tom Herman, those rumors that Strong could somehow stay in Austin withered.

In a game in which the players were supposed to play and win for their coach, it didn’t work out so well. Texas lost 31-9 on a Friday to TCU. Charlie Strong was fired the next morning. Texas hired a new coach that afternoon, Herman. The next week started with Texas introducing him on Sunday.

2. The Kansas game, yeah we’re surprised as well that this isn’t No. 1, but hear us out

The University of Texas, home of Ricky Williams, Earl Campbell and My All-American, doesn’t have a lot in common with the University of Rhode Island. Texas is the largest of the 48 continental states. Rhode Island is the smallest. But what they do have in common is they both lost a football game to the University of Kansas. That’s not a typo, they lost a football game. Men’s basketball coach Bill Self was not involved. Instead of talking about all the terrible things that happened to Texas in the game, here’s our complete coverage of one of he worst days in Texas football history.

1. The only thing that could possibly be worse than losing to Kansas is the threat of having to watch Texas kick more field goals this year

Before you write the emails, here’s what I’m talking about:

Texas field goal is blocked. That's why you go for it after P.J. Locke gave you a free possession and the offense was rolling.

Urban Meyer had a punt and field goal blocked? Sounds like he's throwing his hat in the Texas coaching search. /s

OU should have blocked that Texas field goal like OSU did 3 times last week. 🙃

Here’s a link to the Oklahoma State game.

Here’s another link to the Oklahoma State game

Here’s a third link to the no-good, rotten, awful, terrible day of kicking during the Oklahoma State game

And when they weren’t getting blocked, Trent Domingue was just plain missing them. The graduate transfer was 15-22 on field goals. He was 40-44 extra points. Pretty sure most of those were blocked. Here’s the thing, his numbers actually don’t leap off the page as terrible, but it was a running joke after the Oklahoma State game about how bad he was. People were scared when he stepped on the field and he wasn’t benched until the TCU game in the second quarter.

Well, there you have it Texas fans, the worst of worst from Texas football in 2016. Take a cold shower, maybe pet your dog and know that it can only get better from here. We think.

Finally, someone has recreated the 2006 Rose Bowl in Tecmo Bowl