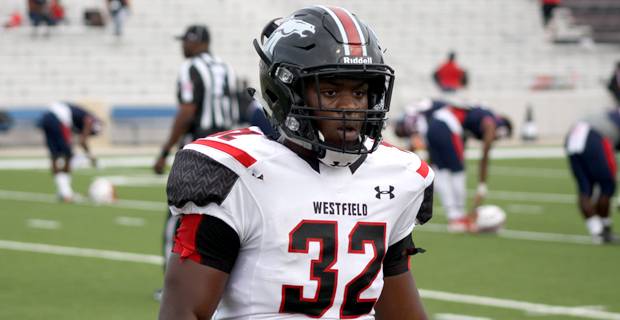 Daniel Young, a 3-star running back from Westfield High School in Houston, committed to Texas on Friday. (Photo by 247Sports.com)

The holiday season is in full swing, and the gifts are rolling in for Texas and coach Tom Herman.

Daniel Young, a 3-star running back from Houston, became the second player to commit to the Longhorns on Friday. He followed Cade Brewer, a 3-star tight end from Lake Travis.

Like Brewer, Young was previously committed to another school. He decommitted from Houston on Tuesday.

Young is the No. 63-ranked running back and the No. 130 overall recruit in Texas according to 247Sports.com’s composite rankings. He ran for 1,290 yards and 19 touchdowns during his senior season at Westfield High School.

Young is listed at 6-foot, 210 pounds. Watch his highlights below:

🤘🏼🤘🏼🤘🏼🤘🏼🤘🏼#BUCKETS!!! Back to back! This commitment will run over anyone in his path #HookEm #GreatDayJustGotBetter pic.twitter.com/wMHZwVxCvM