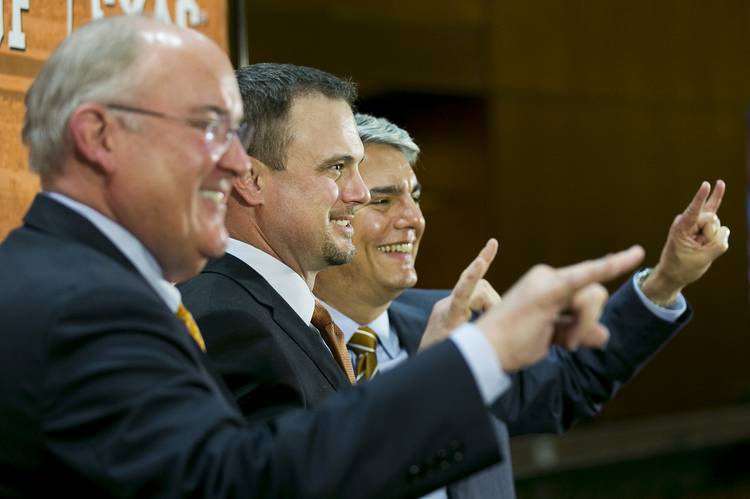 This upcoming year could be big for the Longhorns with two new head coaches, several championship favorites and more. Here are 10 storylines to watch next year.

10. How deep will the Texas women’s basketball team go in NCAA tourney?

Ranked No. 16 in late December, but with a 6-4 record after playing an awfully good schedule, the Texas women should be in the NCAA Tournament field come March, but the question remains: How far can they go? Right now Kelsey Lang looks like the player to lead them there, as well as Ariel Atkins, but it’ll probably be the emergence of sophomore guard LaShann Higgs and freshman forward Joyner Holmes that could be the true difference.

9. Is Chris Warren the next D’Onta Foreman or the next Johnathan Gray?

Chris Warren showed flashes of potential as a freshman and he didn’t get a lot of opportunities as a sophomore thanks to a knee injury during the Oklahoma State game. Much will be expected of Warren next season. He’ll enter the fall as the lead back with sophomore Kyle Porter and possibly true freshman Toneil Carter pushing him (maybe Lil’Jordan Humphrey too?).

Will Warren be the next D’Onta Foreman, and explode for a big season in 2017? Or, will the injury linger and instead of seeing 2015 Chris Warren, we get the second coming of Johnathan Gray, arguably one of the best running backs to ever come to Texas, but was derailed by injury, after injury, after injury.

8.  Texas men’s swimming and diving WILL win another title

The jinx is on me if Texas doesn’t win a 13th NCAA title this season. Three Olympic GOLD medal winners are on the team. Townley Haas could be better. Joseph Schooling is already like the most famous person in Singapore for his Olympic win over Michael Phelps in the butterfly. Jack Conger is back too.  My guess is the storyline isn’t “will they win” but “how many records will they set.”

A few nights ago Texas won by 36 points over UAB, but the win made the Longhorns just 6-5 on the year, tied for the worst record in the Big 12 with Oklahoma State, and the Cowboys have played a tougher schedule. The league looks as competitive as always (some thought there would be a dip, but that’s not the case).

Texas plays the mighty Kent State Golden Flashes on Dec. 27, then it’s 18 Big 12 regular season games. Texas will likely begin that stretch 7-5, so let’s say Texas has a strong Big 12 season, which is like 12-6 or 11-7, and has 18 or 19 wins, is that good enough to be an at-large bid before the conference tournament begins? Is Texas even good enough to win 11 or 12 games in the Big 12? Without solid point guard play, that could be difficult.

And even if they do, will they win the right Big 12 games? Right now only three Big 12 teams are ranked (Kansas, Baylor and West Virginia), if the rankings stay like that, unlikely, Texas will have to beat one of those teams for a win over a ranked team this season. Doable, but Texas hasn’t shown they can beat those three teams yet. Texas will not be going to the tournament with a sub-20 win season, middle of the pack Big 12 record and no top-25 wins on the resume. Facts.

Alas, Texas is probably too talented not to make a run in conference play, and coach Shaka Smart is too good of a coach not to have his team playing well by the end of January, so expect Texas to make a push for the tournament. Also, more teams will likely get fringe rankings, like Iowa State, Kansas State, Texas Tech and maybe even Oklahoma State once conference play begins and teams upset the Bears, Mountaineers and Jayhawks, so Texas should have opportunities to play and beat ranked teams.

Texas volleyball could be the No. 1 team in the nation when the season starts next fall.

Ebony Nwanebu, Cat McCoy and Micaya White all return. All in all, 14 players could be returning to the team next year and the seniors they are losing will likely be replaced by high-level recruits. Texas has made the Final Four two years in a row and lost both times in the title game. A third trip looks downright imminent. If it weren’t for those crazy dudes in the pool, this team should be the most likely team on campus to win it all in 2017.

5. Will #errrbody still want to come to Texas to play football?

Signing day 2016 was special. Texas and coach Charlie Strong closed in on recruits and landed a terrific class for the second year in a row. The two classes are so good that now that Strong is no longer the coach he keeps talking about cakes and what not.

Well, I’ll stick with the analogy: Will Tom Herman add another layer to it, or is he putting the icing on it and the handful of recruits he gets will be like the sprinkles on top?

We know a few players who are coming already. Sam Ehlinger of Westlake High School will be there this spring, Taquon Graham of Temple High School is signing. Previously mentioned Toneil Carter just committed. There weren’t a lot of scholarships available to begin with, and so far the only non-senior leaving the program is D’Onta Foreman. Let’s see what happen over the next few months (and we can guarantee you’ll love the beefed-up recruiting coverage coming to Hookem.com in 2017!)

4. Is Shane Buechele the starting quarterback?

This seems silly and probably won’t be a storyline… or will it? I mean it can’t be a storyline, Shane Buechele played really good for a freshman … or I did he? Buechele ought to be the starter because there’s no way Tom Herman will make that change and go with another true-freshman quarterback as a starter… or will he?

For the record, Shane Buechele should probably be the starting quarterback at Texas next season. He earned it by starting every game last season as a true-freshman. But in the immortal words of that infamous 2009 rant by Texas Tech coach Mike Leach, “that was last $%&#!?& year.”

Buechele could get pushed by Sam Ehlinger, assuming Ehlinger is healthy enough this spring to do so. Outside of the freshman, the only person who could legitimately push Buechele would be Jerrod Heard, who moved to wide receiver last season, unless Matthew Merrick, who redshirted in 2016, emerges this spring.

This shouldn’t be a thing, but you know it will be a thing, which is why it’s one of the four biggest storylines going into 2017. As good as Buechele was in 2016, it’s not as though he was “Colt McCoy good” as a freshman.

But this shouldn’t be a thing, but it is.

3. Texas has a new baseball coach, and the pressure will be on him to win

Augie Garrido is no longer the coach at Texas, and it took about a month to find someone willing to take one of the “blue blood” college baseball programs, that was then Tulane coach David Pierce. If you listened to the people who didn’t want Texas to move on from baseball’s all-time wins leader, Garrido, then you heard an awful lot about how young the 2016 team was, how much talent they have and how Garrido deserved to coach that team in 2017. That same sentiment was echoed this month when Texas fired football coach Charlie Strong.

So yeah, many fans will expect Pierce to win right away. But will he? Give him some time to figure out his way around campus. Maybe he stumbles here and there, but in the end, there’s no reason to believe he couldn’t get this squad back to the NCAA Tournament or at the very least make a run at the Big 12. This is still Texas baseball, and it wasn’t too long ago when Garrido made a run in the Big 12 Tournament in 2015 to make the NCAA Tournament.

Tom Herman will be the most talked about person in the city of Austin this fall. The question is how long will the honeymoon last? If Texas has yet another losing season, will he enter year two with the same cloud Charlie Strong did? If one of his units struggle, will catcalls be made to fire a coordinator? Unlikely.

Herman has dropped that line about pressure a lot lately, he did so in his opening press conference and the other day on the Colin Cowherd show. It’s his stump speech.

But this isn’t walking into Houston. Strong planted the seed in may fans’ minds that Texas should win 10 games next season (I guess I should have made a cake reference). But is Strong correct? Can Texas go from losing to Kansas to winning 10 games next season when the best player on the losing team is leaving for the NFL? Will fans jump on Herman if it doesn’t happen?

Who knows? But there’s only one storyline that could be bigger than Tom Herman’s first season, and that’s only if you look at this list from a big picture standpoint.

1. Will Texas hire an athletic director or stick with Mike Perrin?

Mike Perrin will have been the interim athletic director for two years come September and he’s only supposed to be in that position until the end of the 2017-18 season according to his bio page. Some believe that the uncertainty at the position is why the whole Big 12 expansion kerfuffle was viewed as mishandled. Texas doesn’t really have a full-time athletic director in place. Yet Perrin has hired two coaches in two of the three biggest sports (baseball and football). The baseball coaching search was a sideshow in May and June. The football hire was handled with ease, although the firing of Strong could have been handled better, and without as many leaks.

Texas has big things ahead. A new arena is going to be built and the program has to make a decision on the Big 12 future eventually. If Perrin is the guy, then maybe make him the guy moving forward. If he’s not, then expect Texas to ramp up efforts to find a new and permanent athletic director in 2017. This decisions will impact every sport and every facet of Texas athletics.

Thus, if Perrin wants to remain the athletic director full-time, hiring the hottest football coach in the country is a good start and a great way for people to forget everything else he’s done since September 2015. Maybe he’s the right fit, maybe he’s just a placeholder, but Texas needs to make a decision.