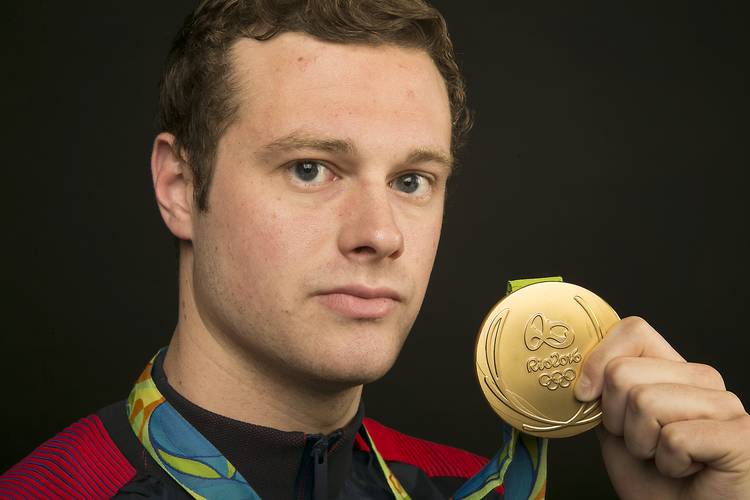 Almost without exception, the best athletes at Texas are among the very best in their respective sports. With that in mind, I decided to choose these 10 athletes from 10 Longhorn teams. Here’s who you should look out for in 2017, in no particular order.

After two disappointing seasons, Boswell caught fire over the summer for the Santa Barbara Foresters. He had a .392 batting average with a .470 on-base percentage, with 17 doubles and 10 home runs on the way to a California Collegiate League championship. The campaign earned Boswell recognition as the Perfect Game/Rawlings summer collegiate baseball player of the year. First-year Texas coach David Pierce will hope he is ready to bring that play to Austin, especially if he is called on to replace Kody Clemens in the lineup. Clemens is likely out for the year after undergoing Tommy John surgery.

When one leaves, another enters. Courtney Okolo was arguably the best athlete on campus in 2016, and won her first Olympic gold medal shortly after leaving. Duncan could be on a similar path. The 100-meter hurdle specialist was the 2016 USATF junior champion and placed fourth at the IAAF World Junior Championships in a personal-best 12.93 seconds. That time would have gotten her to the finals at last year’s NCAA Championships. Track and field  junkies should check out the documentary series FloSports did on her DeSoto High School team this past spring.

Rowing? Heck yes, rowing. Dave O’Neill has quietly built one of the most dominant programs in the Big 12, and Doonan has been one of the catalysts. A two-time All-American, she spent the summer aiding Team USA to a gold medal at the 2016 World Rowing Under 23 Championships. All that’s left to accomplish in her senior year is a national championship.

During her freshman season in 2015, pitcher Erica Wright was so good that she beat out a former Big 12 freshman of the year — Tiarra Davis — for the No. 1 spot in the Longhorns’ pitching rotation. Davis had injuries that limited her playing time in 2015, but Wright filled in nicely with an 18-9 record, 2.42 ERA, 178 strikeouts and seven solo shutouts. The redshirt sophomore earned first-team All-Big 12 and third-team all-region honors as a freshman. Unfortunately, she had to take the entire 2016 season off with a rib injury. With a power offense behind her, Wright’s return in the circle might be the thing that gets the Longhorns back to the Women’s College World Series. Texas coach Connie Clark, who’s in her 21st year as the Longhorn’s coach, surely hopes Wright returns with her 2015 dominance.

Conger is back for one last lap at Texas, and he’s bound to make it a good one. The senior already has four national championships and a gold medal from the 2016 Olympics in Rio to his name. In addition to trying to out-swim the competition, he’s trying to distance himself from the fallout of the Ryan Lochte scandal and the four-month ban he received from the USOC. All of which makes the current American record-holder in the 200-yard butterfly one of the most fascinating athletes on all of the 40 Acres.

Someone has to replace the void left by 2016 Fred Haskins Award winner Beau Hossler. If the fall season was any indication, Hall might be that guy. In October, he led the Longhorns to victory by shooting a final-round 63 at the Golf Club of Georgia Collegiate Championship — the lowest round of the week by anyone. Hall took medalist honors twice as a junior, and was a semifinalist for the Jack Nicklaus Award.

Is the next great Texas running back waiting in the wings, or will Warren end up splitting time with Kyle Porter and/or some of the other young running backs? Warren looked primed for a breakout season before he suffered a season-ending injury at Oklahoma State. Watching D’Onta Foreman rush for more than 2,000 yards and win the Doak Walker Award should have added motivation during his recovery, and with most of the offensive line returning he’ll have holes to run through. Unless freshman Sam Ehlinger challenges Shane Buechele for the quarterback spot, Warren will be the one to watch heading into 2017.

As soon as she saw the pitch, Texas ran its offense through Hintzen. The freshman forward led the Longhorns in shots (46) and shots on goal (19) on her way to earning Big 12 freshman of the year. She only scored two goals, but with a work rate like the ball is bound to find the back of the net in 2017. Hintzen has also featured for the U.S. Women’s National Team at the Under 19 level, scoring a pair of goals last summer in New Zealand.

Maybe the most impressive part about Texas’ run to the national championship in volleyball was that it did so without Ogbogu. The three-time All-American was ruled academically ineligible prior to the start of the 2016 season. She should be back in 2017, which is a big reason why the Longhorns could be favored to win it all. In her first three seasons, Ogbogu tallied 1,317 kills, 363 blocks and had a .405 hitting percentage.

John Burt, track and field (and that other sport)

RELATED COVERAGE: Football or track? John Burt is sprinting ahead in both at Texas

Multiple-sport athletes are so rare at the Division I college level, but John Burt is doing it well. After a productive football season at wide receiver, he’ll put his speed to the test again this spring. As a freshman, Burt qualified for the NCAA Championships in the 110-meter hurdles after running a personal best 13.91 seconds, and ran the anchor leg on the 4×100 relay team that took ninth for All-American status.

Recruits’ impressions of Tom Herman range from ‘swaggy’ to ‘trash’