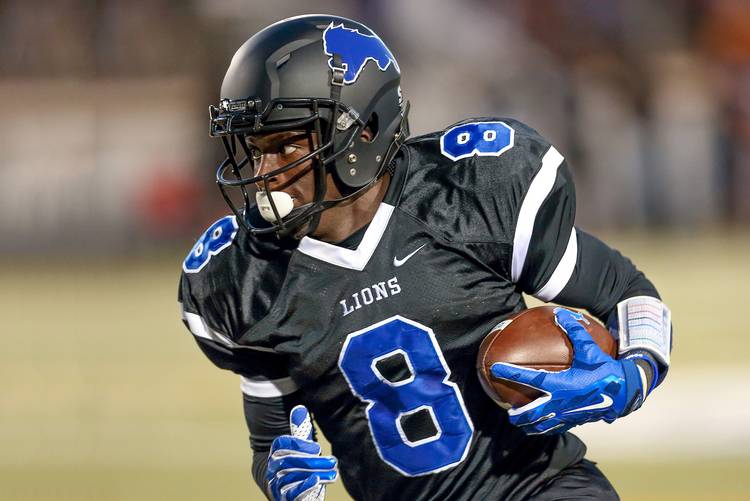 John Tyler's Damion Miller (8)breaks off a long run for a first down against Robert E. Lee in the first half of their contest at TMF Rose Stadium. ( Lang white / Correspondent )

HOW DID HE GET HERE? It took a year-and-a-half to get here; Miller was the very first pledge for Texas’ 2017 class. He committed way back in June 2015, the summer after Charlie Strong’s first season. He was one of six players who signed with Texas that had committed to Strong, not Tom Herman.

AT JOHN TYLER: Totaled more than 2,400 all-purpose yards and 18 touchdowns over his final two years, starring on offense, defense and special teams. And talk about consistency: Miller had 41 catches his junior year and 41 catches his senior year. Was an all-state selection his junior year and a three-time all-district player. In all, John Tyler went 31-9 his three years with a pair of district titles and a Class 5A Division I state semifinals his sophomore year.

WHAT HE’S WALKING INTO: Wide receiver arguably is one of Texas’ strongest position units, but that doesn’t mean a freshman still can’t make a splash (see Devin Duvernay and Collin Johnson, 2016). He can play either outside or in the slot.

THEY SAID IT: “He wants to make sure at the end of the game, there is no doubt in anybody’s mind that the person on the other side couldn’t do anything to stop Damion Miller.” — Ricklan Holmes, Tyler John Tyler coach