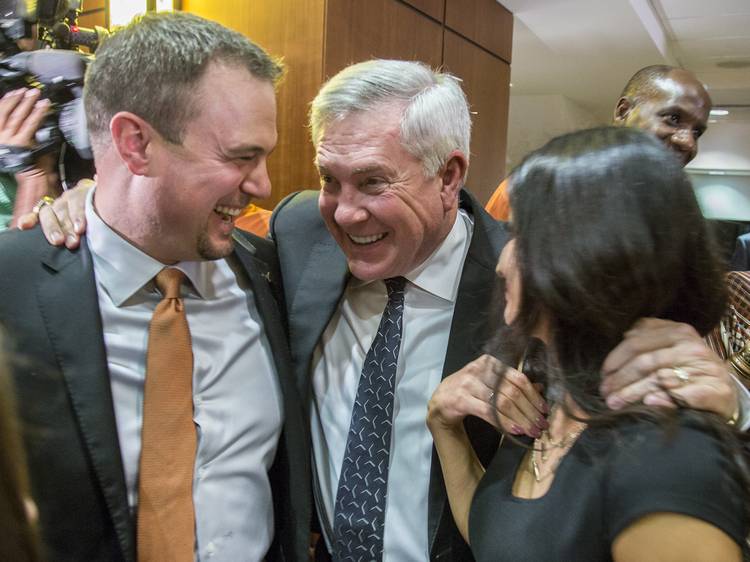 Kirk Bohls doesn’t always nail his crazy predictions in his weekly column (he was not on the Cubs bandwagon this year), but sometimes he’s closer than you think (Tony Romo may never start another NFL game). But it takes guts for the Duck to let loose some of these opinions.

We honor the sage of the Statesman sports desk with our own 2017 crazy predictions and we’re putting our names by them:

Charlie Strong is like the bad cop who does all the dirty work in the movies to set up a confession and Herman is the nice cop who takes credit for the confession. Strong cleaned up the program, recruited hard and waded through two seasons with freshmen and sophomores playing big roles. Now those guys are upperclassmen, the cake has been baked, and Herman gets to come in and eat all the success.

The one loss will be to No.1-ranked Oklahoma, who will be undefeated and No. 1 when the playoff starts and only to get blasted by another semifinalist – The Ohio State Buckeyes. Who will Texas play in the bowl game… keep reading.

Pass that pitcher. Herman has already made a great first impression with the fans, and I’m going to say his on-field debut goes even better — starting with a trick play on the very first play against Maryland.

Herman has never been afraid to mix things up as an offensive coordinator (remember, Alabama?) or head coach (looking at you, Louisville). While most of those moments have come in big games, I think he’ll see the opener as a chance to let loose and have some fun after the dog days of fall camp. And yes, the ultimate fun will come with wins, but there’s nothing wrong with taking some risks every once in a while.

As for the execution: Nothing too fancy. A jet sweep pass from Jerrod Heard to Armanti Foreman will do.

Yeah. Texas isn’t making the NCAA. Sorry, it ain’t happening. But they will go .500 in the Big 12 and at 15-15 will be invited to the NIT. There, coach Shaka Smart will regain his magic, Texas will beat St. Johns in an exciting game in Austin.

Then Texas knocks off Monmouth before heading to the regional, where they beat Utah and Wake Forest. In the national semifinals, they exact revenge against Michigan then exact the ultimate revenge in the title game against NIT darling KENT STATE. Texas wins the recruiting battle for Matt Coleman, Jarrett Allen comes back along with the rest of the non-seniors and Texas wins 30 games in 2017-18 before finishing second to Kansas in the Big 12.

(It’s because Bill Self has put his Big 12 magic in little horcruxes around the league and the first coach to find one will eventual beat him… they won’t find them. #HarryPotterReference)

Chris Bils: Maybe … But they’ll have to do it without Jarrett Allen

I don’t see the Longhorns getting into the NCAA Tournament either, not with the losses they suffered in the non-conference. However, I do think Allen will continue to see his draft stock rise by averaging a double-double in the rugged Big 12. He’ll even put up a 20-20 game in late February, upsetting Joe’s beloved Kansas Jayhawks and costing them a No. 1 seed.

That, combined with a disturbing trend I see developing in March, will leave the Longhorns without their star. Piggybacking off Leonard Fournette and Christian McCaffrey skipping their bowl games, too many NBA-bound freshmen will find themselves faced with games they never planned on playing. So they won’t. We basically saw this last year, when LSU declined its invitation to the NIT after a woefully disappointing season with Ben Simmons.

Washington isn’t making the NCAA Tournament, and I don’t think Markelle Fultz fancies himself in the NIT. It only makes sense that others will follow.

I’m not going to get in the details and talk about why this won’t happen. Facts are for people who can’t win the White House, I want people who get things done.

Texas A&M and Texas will play in the Texas Bowl in Houston. With the Longhorns 11-1 and the Aggies eternally 8-4, Texas enters as a heavy favorite against the Aggies.

But Texas A&M takes an early lead in this game, their fans start chanting “S-E-C.” Then Houston area native, and Katy High School great Kyle Porter, turns the tide with an 80-yard touchdown run, Tom Herman goes for two points, because they won’t let him go for three, Woody Hayes style, and Texas rallies to stun the Aggies 40-30.

After the game, the athletic directors at both schools meet at the 50-yard-line, with microphones, and Texas A&M AD Scott Woodward, in a very WWE moment BTW, says “We’ll see you in Arlington.” Twenty minutes later, Kirk Bohls and Brian Davis tweet that Texas and Texas A&M have signed a contract to play at AT&T Center the following September, but the loser of that game must leave the state of Texas and move to Oklahoma for a year.

With spring practice under his belt, the former Westlake star will come into fall camp fully healthy and establish himself as the … backup. Come on, you didn’t really think I was going to say starter there, did you?

Shane Buechele holds onto his starting spot, but takes a big hit Week 6 against Oklahoma and has to sit out with a shoulder injury. In steps Ehlinger for a matchup against top-10 Oklahoma State. He starts slow with a pair of costly first-half interceptions, but the defense keeps Texas in it and sets up Ehlinger to guide the Longhorns to a game-winning field goal.

Longhorns fans promptly lose their mind, and start calling for Ehlinger to replace Buechele after each incomplete pass the rest of the season. Am I smelling a 2018 quarterback controversy?

After going 16-2 in Big 12 play, losing both games to Baylor, the NCAA puts the Bears and Longhorns in the same region. Texas is the four-seed, Baylor the one-seed. Texas needs overtime to reach the Sweet 16, where they now must play Baylor. But Karen Aston gives the greatest pregame speech ever, telling her team that Jody Conradt didn’t build this program and win a national championship just to lose to Baylor every time. Aston drops the “It’s not 2012, and their jerseys are ugly” line and Texas goes out and blows out Baylor in the regional final.

Texas then coasts its way back to the Final Four for the first time since 2003. They knock off Notre Dame in the national semifinals, then take UConn to overtime before losing by a controversial shot at the buzzer that causes Hookem.com reporter Rick Cantu to tweet a curse word. Texas uses the motivation of the loss and wins 35 games the following season.

One of the biggest knocks on Charlie Strong was his teams’ inability to win on the road. Tom Herman knows this, and he’s going to use the team’s 3-9 away record as motivation during offseason workouts.

Of course, this is going to require the Longhorns beating likely preseason top-5 USC on Sept. 16 at the L.A. Coliseum. With Texas trailing 21-7 after a sloppy first half, Herman will go right back to the “3-9” mantra. The players respond with a rousing fourth-quarter comeback, and carry that swagger with them on the road the rest of the season.

Herman will get the credit when the Longhorns beat his old team, Iowa State, then take back-to-back road victories at Baylor and TCU. Facing an uphill battle at West Virginia, Texas grinds out a season-defining win. However, unlike Joe, I’m not seeing 11-1. Oklahoma is just too much, and Kansas State and Texas Tech will grab unexpected upsets at Royal-Memorial Stadium.

Joe Harrington: Texas football enters 2018 with the No. 1 recruiting class

Because Alabama loses in the National Championship Game, the Crimson Tide take it on the chin in recruiting. Tom Herman notes to every one of his recruits how much younger and hipper he is than Nick Saban. Then, everyday for like a month, a 4-or-5-star recruit commits to Texas, Mack Brown winks at Herman in the hallway and Herman announces that the “mojo is back.”

The year ends with Texas having the most commitments heading into 2018, a 11-1 record, motivation to beat Oklahoma and Texas A&M and Herman is given the first-ever “Kirk Bohls Man of the Year” trophy by Hookem.com.

If you make a crazy prediction about Matthew McConaughey, does it become inherently not crazy?

Either way, I could see this happening. No, McConaughey isn’t going to call out Herman’s play-calling or dis the way his players compete. But I could see both of them suiting up for a good old-fashioned goal-line tackle drill. Did you see Ohio State’s coaches getting after it with the players during bowl practice?

We know Herman likes to do things differently, and I don’t think McConaughey would say no. It’s not quite shirtless late-night bongos, but it could be the perfect start to the bromance all Longhorns fans need.

Do you have your own crazy prediction? Email them to cbils@hookem.com