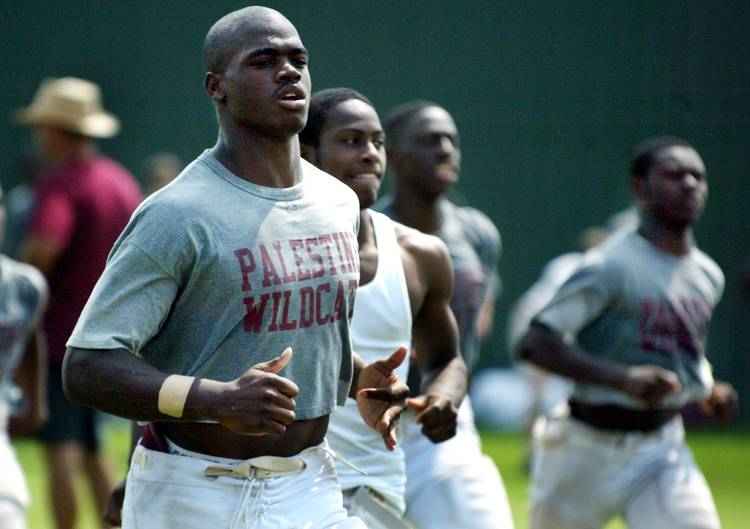 Texas’ football success can be attributed to being one of the best states for football. Texas produces some of the best football payers in the world, and many have opted to spend a few years in Austin wearing burnt orange.

But sometimes they don’t. Sometimes, they play else where.

Here are the 5 highest-rated recruits since 2000 who didn’t play at Texas.

Three of the top-10 highest recruits since 2000 to come from Texas played for the Longhorns, including the best recruit who is also tied with four players as the highest rated recruit since 2000, Vince Young. The two other top-10 recruits to come to Texas are Sergio Kindle at No. 8 and Jackson Jeffcoat, No. 9.

Also, some readers have wondered about Midland Lee standout Cedric Benson. While Benson is one of the greatest Texas high school football players, Texas Longhorn and college running backs of all-time, 247 Sports composite grade had him as the No. 7 running back in the nation in his 2001 recruiting class. He was still a 5-star recruit, but rated behind several future NFL standouts, like Carnell “Cadillac” Williams and 2004 first round pick Kevin Jones (No. 1 on the list). Now 247 Sports was launched nine years after Benson’s class, but the 247 composite rankings look at multiple available recruiting rankings at the time, and uses an algorithm to determine their rankings.

But look, these sites get it wrong all the time.  Colt McCoy was a 3-star recruit from Jim Ned.

Shepard played quarterback at Cypress Ridge and had an impressive senior year, rushing for 1,946 yards with 28 touchdowns while also throwing for 1,843 and 20 touchdowns. He was a Parade All-American and the Touchdown Club of Houston’s 2008 Offensive Player of the Year  winner as well as a Dave Campbell’s Texas Football Super Team member.

He was the No. 2 quarterback overall in the country behind Matt Barkley and in front of Texas commit Garrett Gilbert. He was the No. 1 dual threat quarterback, one above Georgia standout Aaron Murray and two above West Virginia great Geno Smith. Shepard is the second highest-rated player to ever sign with LSU, which is saying quite a bit. He rates above Early Docey, La’el Collins, Patrick Peterson and more.

The Statesman’s Fab 55 listed Garrett Gilbert and Jamarkus McFarland over Shepard in their 2009 list.

Shepard never played quarterback for the Tigers. He played in 11 games as a freshman at running back in 2009, then moved to receiver for the remainder of his career, finishing with a total of 10 touchdowns and 1,286 yards from scrimmage. He caught on with the Philadelphia Eagles after going undrafted and was an Eagles special teams captain in 2015. He is currently with the Tampa Buccaneers, where he played in 14 games, started four and caught 23 passes.

Last year’s top Texas player was also the third-best player in the nation as well as being the No. 1 player at his position. He was No. 1 on the Statesman’s Fab 55 list last season. Little signed with Ole Miss last season, becoming the second highest-rated player to land at Ole Miss and the second No.1 offensive tackles to go to the SEC program (Robert Nkemdiche and Laremy Tunsil came before him).

Little committed to Texas A&M originally, but de-committed in the summer of 2015. He then went on a gaggle of visits to Alabama, LSU and Auburn among others before choosing Ole Miss.  Little did take an unofficial visit to Texas on April 19, 2014 (two days after Texas offered him a scholarship) but it never led to much.

He’s is a big person at 6-foot-5-inches and 305 pounds and this season he earned Freshman All-American honors from Rivals and various SEC honors.

We’re not trying to show a recency bias, and to our defense, Little is on track to be a first round pick and Garrett is expected to be the No.1 pick in the NFL Draft this spring. Garrett choosing Texas A&M was a watershed moment for Kevin Sumlin and his staff. He was the No. 1 player at his position and, like all these players, was the No. 1 player in Texas. Texas landed two top-10 players in the state during this class, Jerrod Heard (No. 10) and Derick Roberson (No. 9).

In December of 2016, ESPN reported that the Browns had an “astronomical grade” on Garrett.

Edwards was part of a recruiting class ranked No. 3 behind Texas and Alabama. Two of those three classes helped their teams win multiple national titles, one did not. The defensive tackle Edwards had 18 sacks and 127 tackles his junior year and 72 tackles and 11 sacks his senior year, leading to the USA Today High School Defensive Player of the Year honors. He was the No.1 player in the Statesman’s Fab 55 rankings.

It probably would have been hard for any school to get Edwards. His father, Mario Edwards, Sr. played linebacker for the Seminoles. His dad was drafted by the Cowboys, which brought the family to the Dallas area.

Edwards had a good career in three years at Florida State, earning first-team All-ACC in 2014. He helped his team win a national title in 2014 and entered the 2015 NFL Draft. Teh Oakland Raiders took him in the second round, 35th overall, and he signed a four-year deal. He ended this season on injured reserve with a hip issue.

The future football Hall of Famer was the top recruit in the nation, coming ahead of Ted Ginn, Jr. (Ohio State recruit), Willie Williams (Miami, Fl. recruit) and Rhett Bomar (also a Oklahoma recruit). Eight spots below Peterson on the running back rankings was 4-star back Marshawn Lynch. Other notable Texas recruits in this class, beside Bomar, are Texas recruit Frank Okam at No. 3, Texas A&M  quarterback Stephen McGee and his favorite target at Burnet High School, Jordan Shipley, who naturally went to Texas. Brian Orakpo was No. 27 on this list.

Peterson was the No. 1 player on Statesman’s Fab 55 list.

We started this post by pointing out how 247 Sports’ composite lists sometimes gets it wrong, well they were right on Peterson, as was everyone else. Peterson became, at the time, a rare freshman Heisman finalist, losing to Matt Leinart in 2004. He rushed for 1,925 yards as a freshman and set a NCAA record by starting his career with nine straight 100-yard rushing games. He had 225 yards against Texas as a freshman, and that Texas team went on to win the Rose Bowl.

The Minnesota Vikings took him seventh. The Oakland Raiders took JaMarcus Russell No. 1. We’ll give Detroit and Cleveland a pass because they drafted likely NFL Hall of Famers in Calvin Johnson and Joe Thomas, but Peterson is the best player in this draft, and Oakland, Tampa Bay, Arizona and Washington all could have drafted Peterson.

Adrian Peterson has rushed for 11,747 yards with 97 touchdowns in his career. He is a seven-time Pro Bowler, five time first-team All-Pro, the 2012 NFL MVP (also winning Comeback Player of the Year that season). He also won Rookie of The Year honors and had led the NFL in rushing three times and twice led the league in rushing touchdowns.

Could Peterson have gone to Texas? he considered Texas and Texas A&M along with UCLA, Arkansas and Miami (Fl.), but in the end he narrowed his decision to Miami, Oklahoma and Southern California:

Texas No. 10 in NCAA’s first in-season poll for women’s basketball