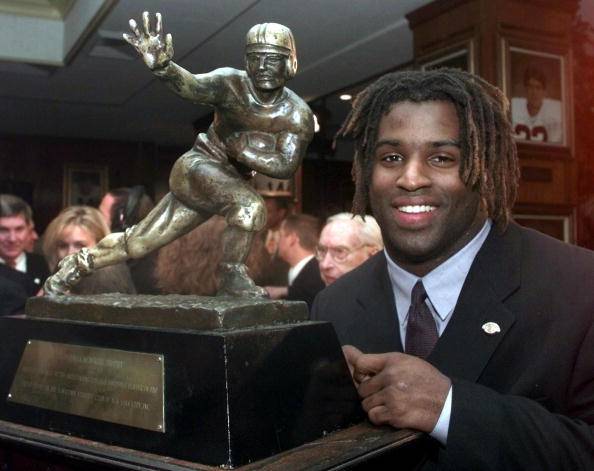 NEW YORK, NY - DECEMBER 12: Texas tailback Ricky Williams, winner of the 1998 Heisman trophy, poses with US college football's highest honor 12 December at the Downtown Athletic Club in New York. Williams ran for 2,124 yards and broke Tony Dorsett's 22-year-old record career rushing record as he led the Longhorns to an 8-3 record and a trip to the Cotton Bowl on 01 January 1999. (Photo credit should read ADAM NADEL/AFP/Getty Images)

National signing day is tomorrow and the thought of recruiting still gives me anxiety.

I covered the beat for the Statesman way back in the day before there was such a thing as a recruiting web site. You actually had to perform old-school reporting tricks like pick up the phone and call a kid (I’m still not sure where we got all the phone numbers) rather than wait for the player to post a commitment on Twitter. I used to nickname my January migraines after some beloved members of the Fab 55.

My recruiting time covered three head coaches at Texas – David McWilliams to John Mackovic to Mack Brown. Kirk Bohls and I had to make phone calls during halftime of the Super Bowl. On Monday, a guy at work sent a mass email asking for our favorite Super Bowl halftimes. I don’t remember any of them.

Way back in the day, the Statesman created a phone line for updated recruiting news. It was free information for our readers. I’d update it every night before I’d go to sleep, which in most cases meant about 4 a.m. I had one reader/listener/well-moneyed Texas fan tell me his wife thought he was having an affair because he’d set his alarm to coincide with the new update. Lovell Pinkney, the blue chip wide receiver from Washington, D.C., was delicious for business back in 1992. He balked on national signing day, delaying his decision between Texas and Miami til the evening. So many people called our recruiting line that it crashed.

When I was moving five years ago, I discovered old phone bills from 1995 hidden away in a desk I never use. The collect calls jumped out at me. They were from Ricky Williams. I’d leave him a message and he’d always call back, collect, at midnight my time. All I remember about those conversations was Williams, then of Patrick Henry High School, seemed a lot more mature and smarter than your average 18-year-old. As a recruit, he was the easiest to cover. And hey, he won a Heisman and broke NCAA records.

Running backs usually meant recruiting drama. And my general rule of thumb on any recruit is the more drama the prospect creates during recruiting the less success he’ll have as a player. Texas went all in for Jerod Douglas, the super star from Converse Judson. This was 1994. Douglas was the top guy on our Fab 55. His mother started telling me about all the negative recruiting going on from schools trying to sign her son. Most of the stories involved allegations that UT was so racist fans would lynch Douglas from a tree outside Royal Memorial Stadium. I quoted Douglas’ mother and wrote a story about negative recruiting. The mother insisted she wouldn’t sign the national letter of intent for her son to go with Baylor. She eventually relented. That fall, Baylor head football coach Chuck Reedy stopped his post-game press conference and said he wouldn’t take any questions from me because I was the “most unethical reporter in the state of Texas.”

Once Texas lost Douglas, the Longhorns went hard after Wane McGarity, who had been committed to Texas A&M, which always was loaded at tailback. McGarity decommitted from A&M and wanted to pledge to Texas. He told me that on the phone at around 9:30 p.m. I still had time to get the scoop into the paper. Problem was, McGarity couldn’t find a Texas coach so he could commit and until he did, he wouldn’t go on the record so I could write a story and make deadline. No one was answering the phone at the UT football office when McGarity called. (This was in the ancient pre-texting, pre-cell phone days). So I found the recruiting coordinator at UT and told him to please answer the phone so I could make deadline. I got the story in.

Colorado and Texas used to go hard after the same guys. I dreaded it when I’d get a call from the recruiting reporter covering the Buffaloes because it meant more work for all of us to track everybody down. But it got kind of silly/stupid over the recruiting of athlete Cedric Cormier. I was at the airport in Austin, coincidentally on my way to cover a basketball game in Boulder, when I got a page from a source at UT. Seems Cormier’s mother told both coaching staffs that she was only talking to me. That was crazy because it wasn’t my job to be a liaison. Fortunately, she’d backed off that statement by the time I got to the Denver airport. I still named a migraine after her son.