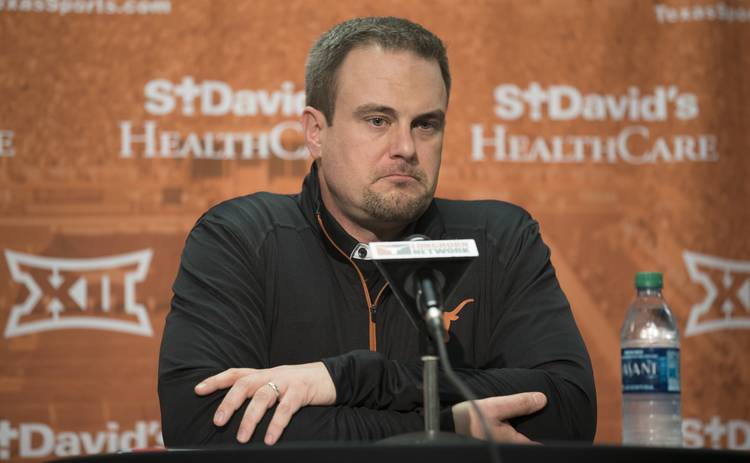 “He’s also a kid that — get this — in high school, at 215 pounds ran the 100-meter dash in 10.59 seconds and he did it with no blocks,” Herman said of the incoming linebacker. “Every other kid had the blocks, he just said, ‘coach, I don’t feel comfortable in track blocks. I feel better just coming out of my stance.’ He goes and wins the dang race running a 10.59.”

Trevor Mitchell, Johnson’s track and field coach at Douglas (Alabama) High School, tweeted a video of one of Johnson’s races.

ESPN recruiting reporter Jeremy Crabtree also acquired video of what appears to be the same race. That’s Johnson wearing red, third from the right, and sure enough you can see that he isn’t using starting blocks. It only takes him about 40 meters to make up whatever ground was lost because of it.

Tom Herman told a story today about No. 1 juco LB and Horns’ signee Gary Johnson running a 10.59 100-meter w/o blocks. Here is that video. pic.twitter.com/KRdf2HnP8X

Johnson was the 2015 Class 5A 100-meter champion, running a time of 10.90 in the final. In Mitchell’s video, you can make out “10.79” as the times flash across the scoreboard. That’s the time Johnson ran in prelims. In a reply, Mitchell also said Johnson hurt his knee landing a long jump the week prior and was still feeling some ill effects.

As for Herman’s assertion that he ran 10.59? MileSplit lists that as Johnson’s personal best, so it also checks out. His other PRs listed by MileSplit are 21.80 in the 200 meters and 21-0 in the long jump.

For comparison’s sake, Texas wide receiver Devin Duvernay — also known for his track exploits — had PRs of 10.27, 21.32 and 22-3. However, Duvernay came in 20 pounds lighter at 5-11, 195 pounds, and plays a position where speed is more of a requirement than a unique advantage.

Johnson, the top-rated junior college linebacker and a former Alabama commit, was one of the most important signings for the Longhorns. At 6-foot-1, 225 pounds, he’s touted as a new-age linebacker because of his speed and instincts and is expected to play in the middle of the field.

If his instincts are as impressive as his speed, Johnson could quickly become a fan favorite for the plays he is able to make.