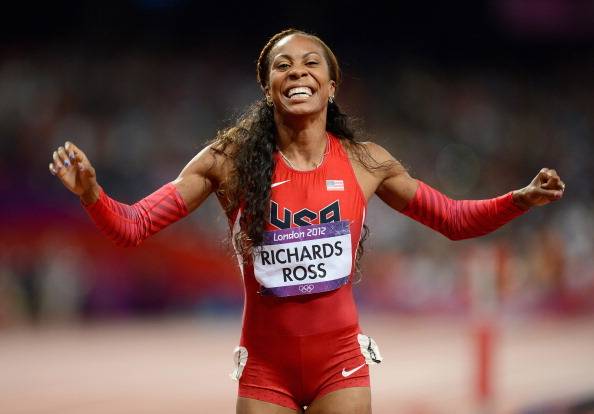 LONDON, ENGLAND - AUGUST 05: Sanya Richards-Ross of the United States reacts as she wins gold in the Women's 400m Final on Day 9 of the London 2012 Olympic Games at the Olympic Stadium on August 5, 2012 in London, England. (Photo by Julia Vynokurova/Getty Images)

The couple confirmed the news to People magazine, then posted photos on their social media accounts to let their fans know.

“Many parts of our lives have felt like a fairy tale, but this is our biggest blessing yet,” the couple told the magazine. “We are so excited to start a family and can’t wait to begin this new adventure.”

The baby will be blessed with elite athletic bloodlines.

Ross was an All-American and winner of the Thorpe Award as the nation’s top defensive back in 2006. He was a first-round NFL draft pick the following spring.

Richards-Ross is a four-time Olympic gold medalist who specialized in the 400 meters.

👀. This is the happiest moment of my life. #DaddyTime.”

Golden: How does rest of the Texas hoops season affect 2018 for Shaka Smart?

Why are Sam Ehlinger and Dylan Haines in a Twitter beef?