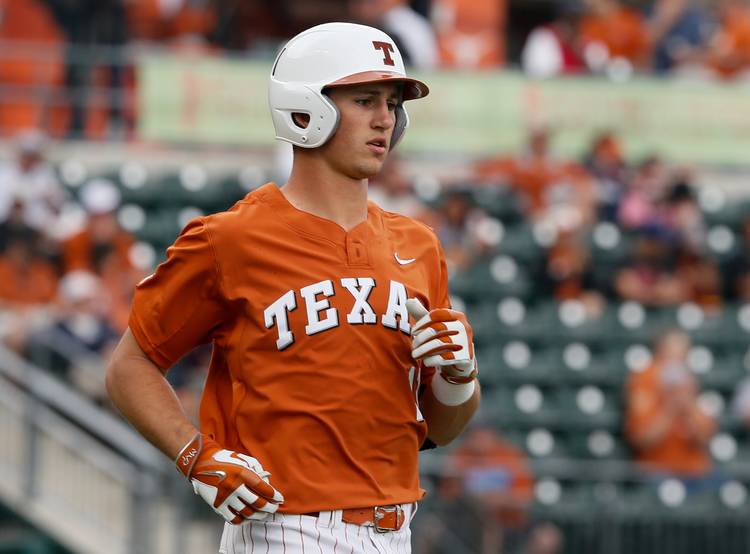 Travis Jones (11) takes first base on walk in the final game in a series against the Rice University Owls at the University of Texas' UFCU Disch-Falk Field in Austin, Texas on February 19, 2017 (Andy Nietupski for AMERICAN STATESMAN)

Michael Cantu and Travis Jones each homered to help lift the Texas Longhorns to a 7-2 win over the Sam Houston State Bearkats in Huntsville on Wednesday night. It was the Longhorns’ first win on the road this season and their first trip to Huntsville in team history.

Cantu’s homer was his first since March 24, 2015 and gave the Longhorns a 2-0 lead in the fifth before Jones hit a three-run bomb to make it 5-0 in the sixth inning. Cantu finished 1 for 3 with a run scored and two runs batted in as Jones was 1 for 4 with three RBIs and a run scored. Tyler Rand was 2 for 2 with an RBI.

Nolan Kingham (1-1) picked up the win for Texas (3-2), allowing no runs on five hits through five innings. He struck out five and walked two. Dakota Mills (0-1) was hit with the loss despite not allowing a hit to the Longhorns through four innings. He eventually gave up two runs on three hits in 4 2/3 innings.

The win was David Pierce’s 200th as a head coach and his first road victory with Texas. It was also the first time the coach returned to Huntsville after serving as head coach there from 2012-14.

Before either team was on the scoreboard, Texas got in a little trouble in the third inning. Kingham hit Taylor Beene and then walked two batters. Lance Miles then reached base on a fielder’s choice, but Beene was thrown out at home by Ryan Reynolds. A double play turned by David Hamilton, Bret Boswell and Kacy Clemens got Kingham out of the inning.

A balk in the bottom of the seventh with two runners on base and two outs took a potential strikeout away from reliever Jon Malmin. The Bearkats (2-2) advanced runners to second and third base as a result. Malmin was able to induce a ground out following the play but it helped the Bearkats get on the scoreboard as Hunter Hearn scored.

Bryce Johnson hit a sacrifice fly to score another run, making it 5-2. That ended the day for Malmin as Beau Ridgeway came into the game. Ridgeway didn’t allow a run through 1 1/3 innings.

After Texas tacked on two more runs in the ninth, the Bearkats were able to get two men on base with no outs in the bottom of the inning. Chase Shugart allowed a walk and a base hit before he was able to strike out Johnson and Riley McKnight, back-to-back. Shugart then induced a ground ball by Miles to get the final out.