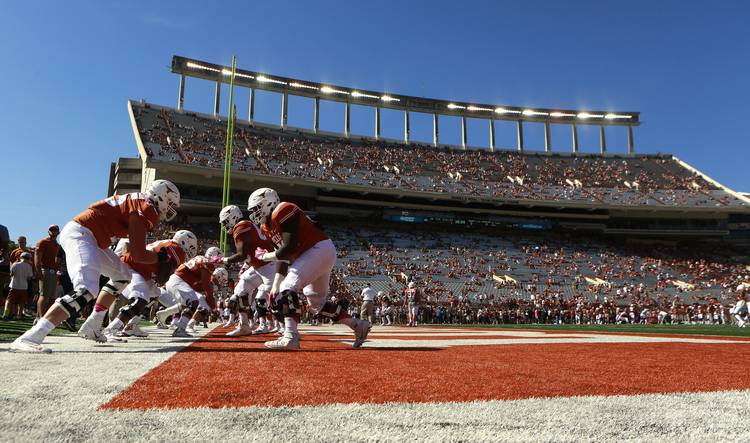 In less than 50 days, Texas football will play the 2017 spring football game in Royal-Memorial Stadium.

So here are some facts and figures to know about Texas’ home stadium.

It’s all in the names

Largest crowd to ever see the Longhorns play at Royal-Memorial Stadium was last fall against Notre Dame when 102,315 people saw the Longhorns win. This helped make the 2016 season the seventh most attended season in program history. It also is a big reason why alcohol sales went through the roof for this game. The 50-47 double overtime win also was the biggest victory of the year and one of the best in the Charlie Strong era.

More Longhorn fans saw Texas play at home in 2010 than any season in program history. That is also, probably, the beginning of the end for the Mack Brown era as the Longhorns went 5-7, losing at home five times. The final number was 704,580 people who saw the Longhorns play this year in Austin. However, helping the cause is Texas playing seven home games. In fact, the top three seasons all came when seven home games were played, because, you know, math. Those seasons were: 2010, 2008 and 2006.

The law of averages

While 2010 saw the most people, it was not the top by average. The highest average attendance for any football season came in 2009, a much, much better season and one in which Texas finished in the BCS Championship Game. Texas’ average attendance that year was 101,175 people. This also came after a stadium expansion, as well as the team entering the year with a Heisman candidate (Colt McCoy), a top 10 AP ranking (No. 2 in the land) and coming off a bowl win over Ohio State.

The best season of football under Mack Brown, what were the attendance numbers you might ask? The stadium capacity in 2005 was a little above 80,000 (80,092), but the average attendance was  83,333. I’m sure there’s some type of math problem that can be designed to show that proportionally this season tops 2009. But this all about raw attendance numbers, and the at the end of the day, there were 20,000 less seats in the stadium 12 years ago.

OK, so you know how old school Texas fans love to talk about how great the old days were? Well, next time one them bashes Texas fans who are millennials, remind them that back in 1969, Texas fans didn’t sell out Memorial Stadium.

The capacity number was 66,397 in 1969. And not once was there a sellout at the stadium. In fact, the final home game of that season against TCU yielded just 51,000 fans! Texas destroyed TCU 69-7 that day, and there wasn’t even an ACL Fest or Formula One race to deal with, so no excuses old-school Texas fans.

*All attendance statistics are from the University of Texas athletics website.