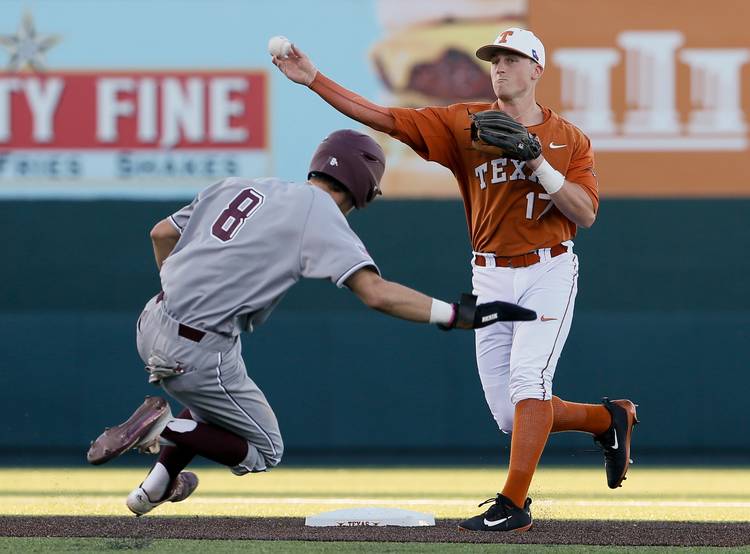 Bret Boswell take relay throw for a double play in a game of the Texas A&M University versus the University of Texas at UFCU Disch-Falk Field in Austin, Texas on March 14, 2017 (Andy Nietupski for AMERICAN STATESMAN)

A tough test awaits Texas as it attempts to reestablish itself as a contender in the Big 12.

Texas (13-6) opens its Big 12 schedule this weekend as Texas Tech (14-4) comes to town for three baseball games. The Longhorns haven’t finished above fifth place in the Big 12 standings since a third-place showing in 2012. Texas Tech, meanwhile, won the Big 12’s regular-season championship in 2016.

“I’m ready to rock for Big 12,” Longhorn first baseman Kacy Clemens said. “Why would you not be? We’re playing our best baseball right now. If can just continue to do that, we’ll get off to a good start.”

The Longhorns are three days removed from their biggest win of the year, a 4-3 takedown of rival Texas A&M. Texas has raised its batting average from .203 to .245 during a six-game winning streak. (Texas has played those six games at UFCU Disch-Falk Field). The Longhorns’ 2.54 ERA ranks 16th in the country.

Texas Tech is ranked sixth in D1Baseball.com’s national poll, but the Red Raiders are coming off a 5-1 loss to UT-Arlington. Texas Tech has wins over No. 7 LSU, No. 9 Arizona and No. 16 Ole Miss on its resume. The Red Raiders also dropped a 9-0 decision to No. 17 Texas A&M.