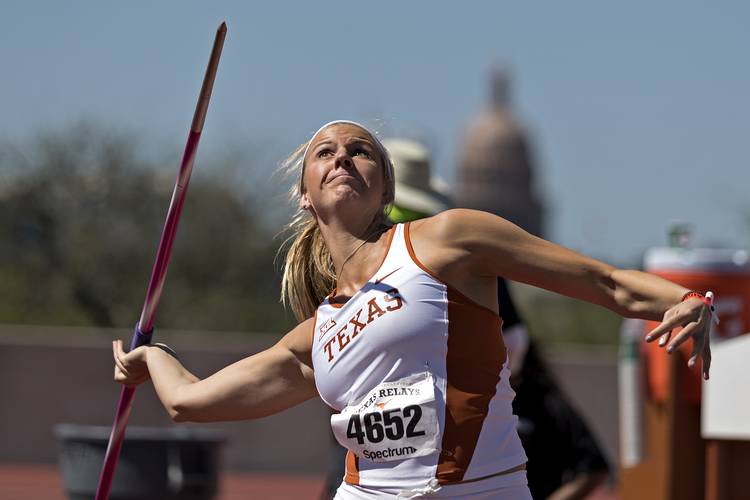 The Texas Longhorns track and field team picked up a win and 11 overall top-5 finishes at the Michael Johnson Invitational in Waco on Saturday.

The Longhorns just sent field competitors to the event.

Haley Crouser highlighted the action with her first-place finish in the javelin event, recording a mark of 165 feet, 3 inches. Cold conditions made for a tough meet, but Crouser’s next closest competitor was 13 feet short of her distance.

“Today wasn’t about performances because of the inclement weather for most of the people competing,” assistant coach Ty Sevin said. “It was about putting yourself in a situation to overcome adversity, and it was a learning experience for people to learn how to compete in cold weather.”

Brian Peterson took second place in the discus with a throw of 181-11 to follow up last week’s win at the Texas Invitational.

Lauryn Caldwell and Elena Bruckner finished in third an fourth in the women’s hammer throw. Caldwell recorded a throw of 177-5 while Bruckner was just under four feet short of her teammate at 173-8.

Bruckner also finished in second in the shot put while Caldwell took third. Bruckner had a mark of 53-1 3/4 while Caldwell recorded a distance of 48-10 1/4.

Bruckner took third in the discus while Caldwell finished in eighth.

Alan Zapalac finished in fifth in the men’s hammer throw with a distance of 200-3. It was his best throw of the season.