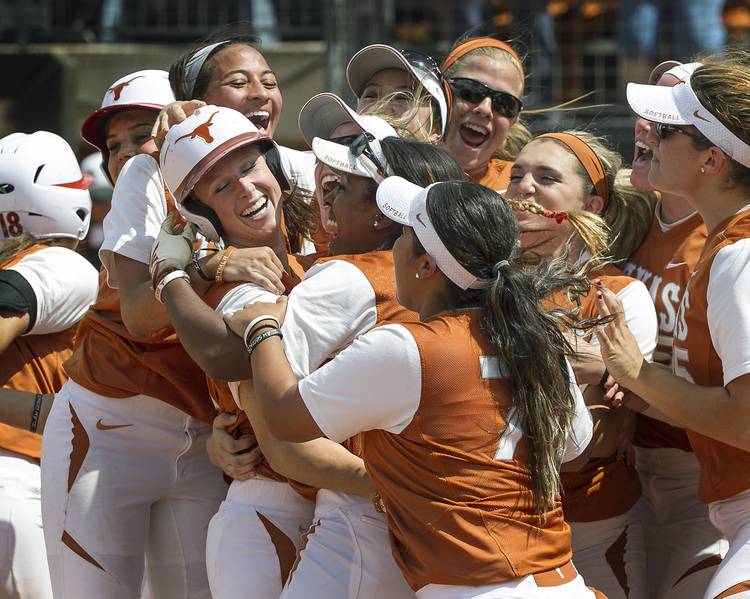 Taylor Thom, helmet, is mobbed by her teammates after driving in the game-winning run against Baylor in the seventh inning on Sunday May 11, 2014. Texas defeated Baylor 3-2 on an RBI-double by Thom. RODOLFO GONZALEZ / 2014 AMERICAN-STATESMAN

Texas softball’s regular season comes to an end Sunday when the Longhorns and 17th-ranked Baylor conclude their three-game series at McCombs Field.

Texas is 28-16 all-time against the Bears and hasn’t lost to Baylor at McCombs Field since May 15, 2011. As a matter of fact, both teams protect their home turf rather well in this series; The Bears have won four of the last five games at Getteman Stadium in Waco while the Longhorns have won each of the last five at McCombs.

The importance of winning this series for Texas (29-20, 6-8 Big 12) aside, there is sure to be plenty of drama in store this weekend. Take out the 2016 finale, when the third game was cancelled due to bad weather, a senior has played hero in the last three regular-season Texas-Baylor finales at McCombs:

2013: Kim Bruins. Bruins, a senior from California, took the first pitch from Baylor’s Whitney Canion in the bottom of the ninth and sent it flying over the head of the Bears’ right fielder, plating fellow senior Taylor Hoagland for the game-winning run. Bruins was 2 for 4 and Hoagland went 3 for 3 with two runs scores. Another senior, Blaire Luna, pitched all nine innings for her 24th complete game of the season.

2014: Taylor Thom. Texas’ 3-2 storybook ending was Taylor-made. Thom, a senior and UT’s all-time RBIs leader, ripped a double into right-center to bring home fellow senior Brejae Washington for the game-winning run in the bottom of the seventh. All four of UT’s seniors, including Mandy Ogle and Karina Scott, had hits. Thom was 2 for 4 and capped her final regular season with 42 RBIs. She finished her career with 178, breaking Lexy Bennett’s old school record. “I couldn’t have scripted it any better,” Texas coach Connie Clark said after the game.

2015: Gabby Smith. Smith homered for the second straight game, going 2 for 3 in Texas’ 5-0 win. The senior scored two runs and had a double, the home run and three RBIs. The game was never in question after the Longhorns put up three runs in the second inning. Senior Marlee Gabaldon singled with two outs, then Smith blasted a double to the center field wall to score Rachel Scott who was pinch-running for Gabaldon. Smith’s two-run homer in the fourth was more of an insurance run for then-freshman Erica Wright, who pitched a complete-game shutout.

EXTRA BASES: Texas placed nine players on the Academic All-Big 12 team, which was released Thursday. Texas had seven first-team honorees in Davis, Hanzel, Krpec, Leahy, von Sprecken, Wong and Wright. Clark and Reagan Hathaway were on the second team. Players must maintain at least a 3.0 GPA for the two previous semesters and play in 60 percent of their team’s games. First-team members have maintained a 3.20 GPA or better; second-teamers must have a GPA between 3.00 and 3.19.

ON DECK: The Longhorns close out the regular season this weekend against No. 17 Baylor in a split home-and-home series. Baylor will host Game 1 on Friday and Texas will host Games 2 and 3 on Saturday and Sunday. The Bears went 2-1 against Oklahoma State last weekend while Texas won two games against Kansas. Here’s the upcoming schedule (all games will air on 105.3):

BIG 12 POWER POLL: Oklahoma clinched its sixth straight Big 12 regular season title with a sweep of Texas Tech, accompanied with Baylor’s series win over Oklahoma State. The Bedlam series is this weekend, but it doesn’t really matter. The top three seeds are all but set for next week’s Big 12 tournament in Oklahoma City.

That’s all the dust for this week, but I leave you with this social media win by Texas State softball.