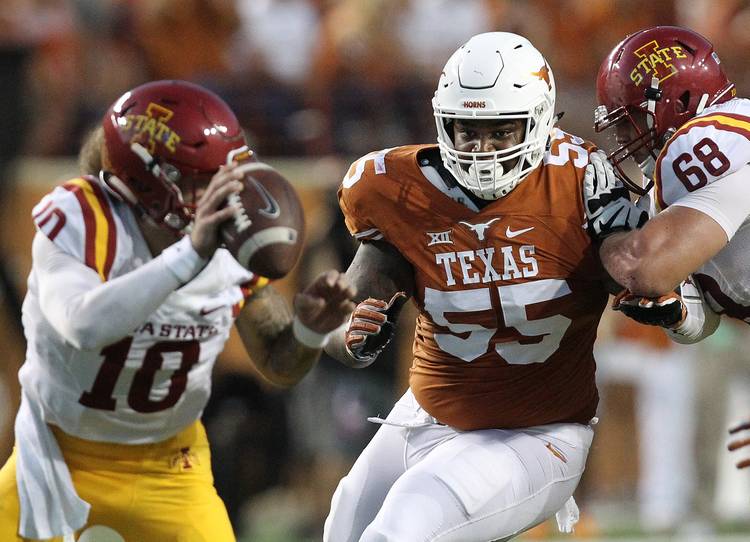 This week, Texas lost some depth on its defensive line.

A Texas spokesperson confirmed on Thursday that Jordan Elliott will transfer and that Marcel Southall has left the football team. Elliott and Southall were both 300-pound defensive linemen and members of Texas’ 2016 recruiting class.

Poona Ford and Chris Nelson are among the five defensive tackles left at Texas, and junior-college transfer Jamari Chisholm signed with the Longhorns in February.

Elliott appeared in six games in 2016, although a knee injury cost him playing time. He totaled only eight tackles during his freshman year, but the 6-5, 330-pound Elliott had two sacks in Texas’ spring game this past April. A four-star recruit out of Houston Westside, Elliott committed and de-committed from four schools (including Texas) before he settled on the Longhorns.

Southall, who was a three-star prospect out of Duncanville, redshirted in 2016. Listed at 300 pounds on the Texas roster, Southall was sidelined during part of this spring as he focused on academics.

Elliott and Southall become the fourth and fifth scholarship recipients to depart the Texas football program during Tom Herman’s first off-season. Receiver Jake Oliver, who will graduate this week with a degree in physical culture and sports, left a year of eligibility on the table in February.  Third-string quarterback Matthew Merrick turned in his helmet during spring practices. Tight end Peyton Aucoin, who joined Elliott and Southall in Texas’ 2016 recruiting class, has also announced his intention to transfer.