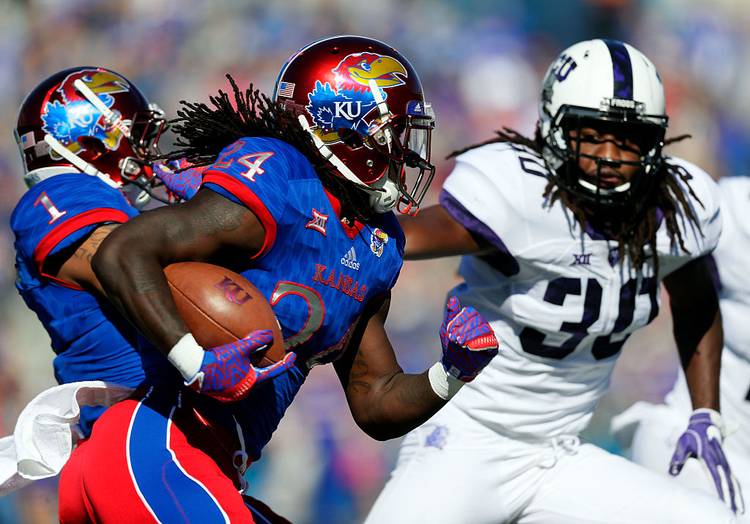 LAWRENCE, KS - OCTOBER 08: Running back Taylor Martin #24 of the Kansas Jayhawks carries the ball as safety Denzel Johnson #30 of the TCU Horned Frogs defends during the game at Memorial Stadium on October 8, 2016 in Lawrence, Kansas. (Photo by Jamie Squire/Getty Images)

Kansas running back Taylor Martin worked his way into the starting role toward the end of last season, and he’ll be intent on keeping it despite an influx of talent in Lawrence. Martin rushed 91 times for 324 yards and four touchdowns in 2016. He and sophomore Khalil Herbert will compete for carries with prized recruit Dominic Williams and junior college transfer Octavius Matthews.

Texas learned the hard way that even the worst team in the Big 12 cannot be overlooked, and the same can be said of Martin. A standout at Fort Worth Dunbar, he averaged 12.6 yards per carry as a junior. He’s powerful and elusive, and showed off his speed on a 45-yard touchdown catch at West Virginia last season. Kansas runs the Air Raid under David Beaty, but ignoring its running backs would be foolish.

Martin started against the Longhorns in 2016, but barely featured in the 20-16 overtime upset. He had two carries for four yards.