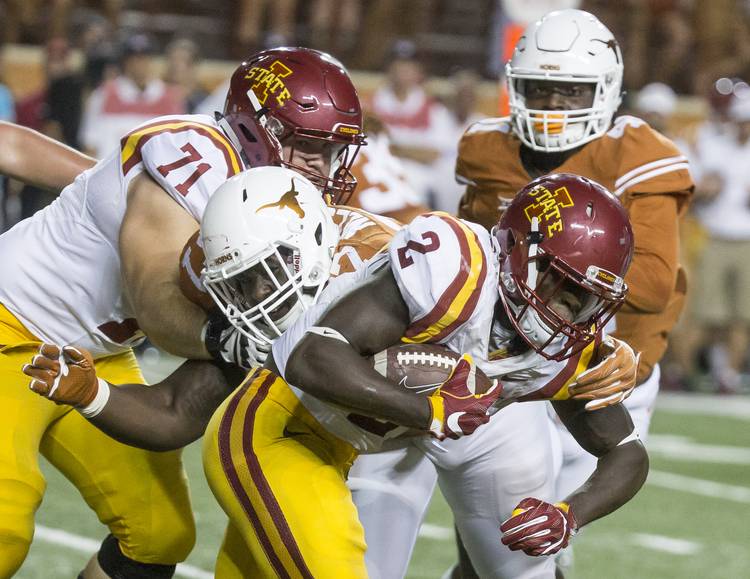 Remember 2015 Mike Warren? The Big 12 offensive freshman of the year rushed for 157 yards and a touchdown to help Iowa State beat the Longhorns. So, what happened to Warren in 2016? An ankle injury limited his production (134 carries, 559 yards, 3 TD) and allowed freshman David Montgomery to take his starting spot, he got called out in the media by his head coach, and rumors swirled about a possible transfer. Warren stuck it out, and now he’s on the comeback trail.

As you’ll find out in this series, Warren isn’t the only offensive weapon opponents of Iowa State will have to worry about. In fact, the starting running back job is still very much up in the air between he and Montgomery. But if Warren can regain his 2015 form, watch out. He’s a powerful back with the potential to break a long run at any time.

Yeah, you don’t want this guy getting past the second level.

As mentioned, Warren was a key cog in that 24-0 debacle in Ames. He carried the ball 32 times for 157 yards and a touchdown. Last year against Texas, he received 16 carries for 60 yards.

Warren: “You have to finish what you start and that’s always one thing that I’ve prided myself on and my parents have told me that as well. Just hearing that voice in the back of my head, you can’t leave, you’ve got to stick it out because … (when) times are tough, you just have to keep on pushing through it.”

Iowa State coach Matt Campbell:  “Probably 95 percent of the kids that are in his position leave. Mike’s conversation was never that. It was about the team. The one thing I’ve always appreciated about Mike is that Mike is a great teammate. You go through peaks and valleys, especially when you’re young and you’re early in your career, so I think you’re just going to continue to see the best of Mike Warren as this continues to go.”