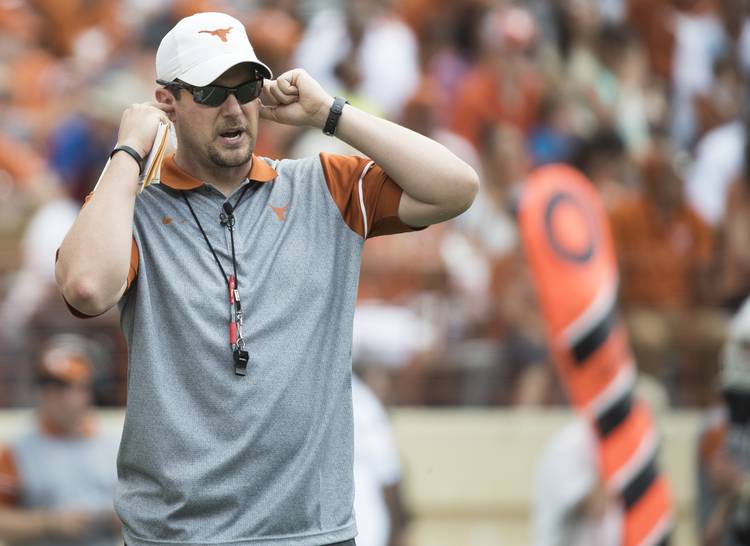 Tom Herman turned 42 on Friday, which in the grand scheme of things is still pretty young. When your job requires relating to 17- to 23-year-olds, though, the years can add up fast. Herman has bridged that gap as well as any coach in the business with his constant social media presence and a youthful energy that’s hard to fake.

Here are five ways Herman has proved he is younger than his age.

Herman made a major impression on the college football world earlier this year when a chart from within his team’s facility got leaked. Yes, that’s a lame pun, but we have a feeling Herman might appreciate it. Why else would he have a pee chart threatening expulsion to “Area 51?”

One way Herman makes sure he can relate to his recruits and players is by listening to the music they do. The Texas coach often participates in Mixtape Mondays, signing off on playlists that are presumably played in the facility. He has strong opinions when it comes to his favorite rappers, and when he was in Houston he even got fitted for a grill by Houston artist Paul Wall. He’s already broken it out at least once on the recruiting trail for the Longhorns.

RELATED: Tom Herman busts out the grill over the weekend

Kid in a candy store

If Herman thought he had it made in Houston, the past few months must feel like a dream. Money is no object on the 40 Acres, and the new Longhorns coach isn’t shy about coming up with ways to spend his program’s riches. Better yet, he has the UT administration on board with his vision. Who knows? The futuristic lockers might just be the tip of the iceberg.  If Herman can get $10 million worth of upgrades before coaching a game, imagine what might be coming if he wins a national championship.

Herman isn’t just relating to the 20-year-olds he interacts with on a daily basis. He’s also reached out to the UT student body multiple times, showing he’s in touch with what it means to be a college student rooting for your school. In December he spent an hour handing out pizza to students during finals, and in March he held the program’s first-ever student appreciation practice.

‘There was a fruit tray’

In case you still think this is all an act, one moment still stands above the rest as a genuine display of Herman’s youthfulness. Does this really look like the grocery cart of a 42-year-old?

Happy birthday, coach. May you keep wearing your grill while eating Lucky Charms long into the future.