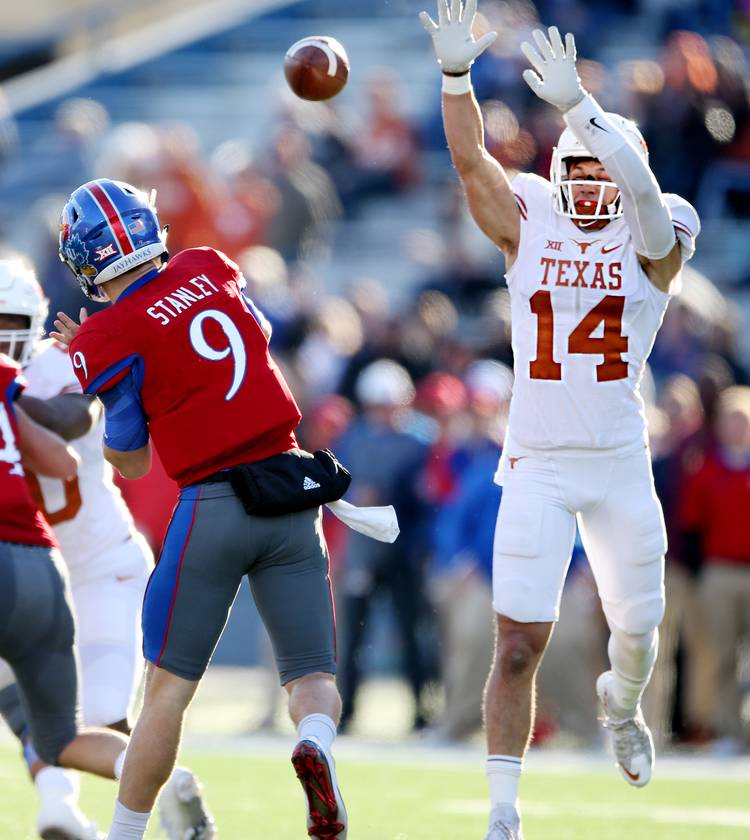 Texas's #14 Dylan Haines tries to block a passs by Kansas's #9 Carter Stanley during the first half in Lawrence, Kansas on Saturday, November 19, 2016. DEBORAH CANNON / AMERICAN-STATESMAN

Carter Stanley’s inclusion on this list depends greatly on a major decision yet to be made by Kansas coach David Beaty. Will he stick with the quarterback who helped bring the Jayhawks their first Big 12 win in two seasons, or will transfer Peyton Bender unseat Stanley? The Longhorns are familiar with the slight-of-frame (6-foot-2, 196 pounds) Florida native who threw for 220 yards in Kansas’ 24-21 overtime victory that spelled the end of Charlie Strong. One week later, he passed for 302 yards and a pair of touchdowns against Kansas State.

OK, so the standard hasn’t exactly been high for starting quarterbacks since the days of Todd Reesing in Lawrence. That might be about to change. In his first three college starts, Stanley completed 57 percent of his passes. He’s also an able runner, which is a plus in Beaty’s air-raid system. Bender — a former Washington State recruit who played last season at Itawamba Community College (Miss.) — brings many of the same traits. No matter who is under center, the Jayhawks have depth and speed at receiver and a pair of capable running backs.

Stepping on the field against Kansas isn’t enough anymore. Texas learned that the hard way in 2016.

Stanley wasn’t perfect in last year’s meeting, but he did enough to win. In just his second start, he completed 21 of 42 passes for 220 yards and an interception. With 51 seconds left, he got the Jayhawks in position for the game-tying field goal.