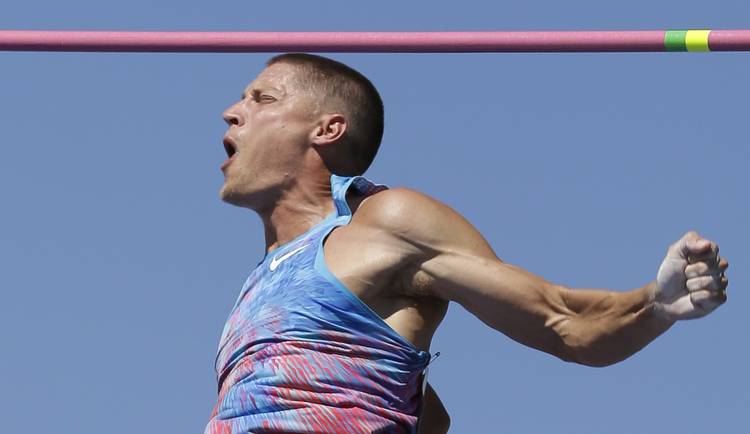 Texas ex Trey Hardee once again won the national title in the decathlon at the USATF Championships in Sacramento, Calif. on Friday. He scored 8,225 points, edging out Zach Ziemek by just 70 points. It’s Hardee’s fourth time winning the title.

Hardee held a 134-point lead over Devon Williams of Georgia heading into the final event, the 1,500 meters. The former Longhorn managed to hold off Williams and Ziemek despite finishing the race last. Williams finished just ahead of Hardee and Ziemek overtook Williams for second overall with a 10th-place finish in the race.

Hardee opened the day with a second-place finish in the 110-meter hurdles and then won the discus throw. He crossed the finish line in 13.97, 0.36 seconds behind Williams in the hurdles. Hardee’s throw of 157 feet, 7 inches held up for the win in the next event.

Hardee will next turn his attention to the IAAF World Championships, where he’ll attempt to take his third world title.

RELATED: Cedric Golden discussed Hardee’s quest for one more Olympics prior to this week’s competition.

Steele Wasik, current Big 12 decathlon champion and a junior at Texas, finished in eighth place with 7,667 points. His best finish on the second day of competition was third in the high jump. He cleared the bar at 6-6.

Current Longhorn, Byron Robinson qualified first in the first round of the 400-meter hurdles at the USATF Championships. His time of 48.91 put him at the top of the qualifiers.

Former Longhorn, Courtney Okolo, qualified eighth in the 400-meter semifinals. She clocked a time of 51.42 for the last spot in the final. Zola Golden, a sophomore at Texas, failed to qualify with a time of 52.54.

Chrisann Gordon, also competing at the Jamaican National Championships, qualified for the 400-meter final with a time of 51.15.

Morolake Akinosun took fourth place in the 100 final with a time of 11.12. She was 0.02 seconds shy of qualifying for her first world championship team as an individual. Akinosun qualified for the final earlier in the day with a third-best time of 11.17. Her final time makes her eligible for the 400 relay pool for Team USA at the World Championships.

Tripp Piperi, a future Longhorn, will join Patrick at the Junior Championships as he finished with a silver medal in the shot put. His throw of 68-3 was good enough to send him to Lima, Peru as a member of Team USA.

Serenity Douglas, a freshman at Texas, finished 11th in the 400 at the Junior Championships.

For those in the Central time zone, the second day of the USATF Championships technically started Friday with the men’s 10,000 meters as it was run after midnight Thursday. Former Longhorn Ryan Dohner took 16th place in the final with a time of 29:44.40.