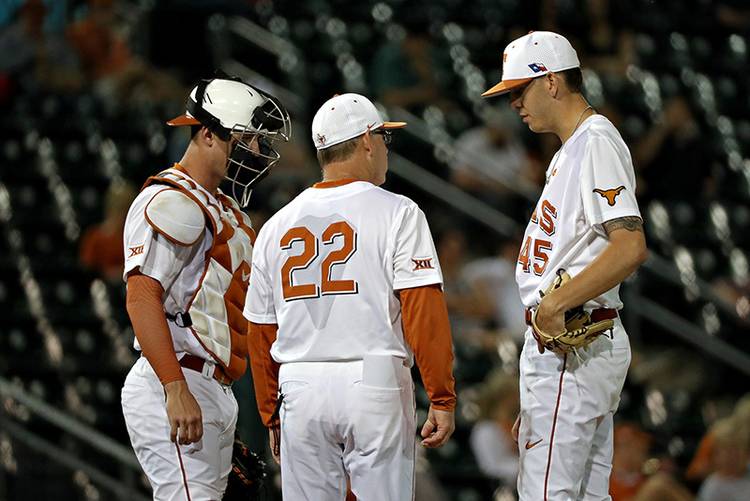 Donny Diaz announced earlier this week that he will play baseball at Texas in 2018.

A right-handed pitcher who had previously signed with Texas, Diaz was drafted by Boston in the 23rd round of this month’s MLB amateur draft. Diaz has spent the past two years at San Jacinto Junior College.

Thank you to the @RedSox for giving me this opportunity, but I'm going to The University of Texas!!!!
🤘🏽🤘🏽 #Hook'em

Diaz was 3-0 with seven saves and a 2.08 ERA in 2017. He projects to be an option out of Texas’ bullpen. Said UT coach David Pierce in November: “Donny has that closer mentality you want. He pitches the same no matter what the score. He has an explosive fastball and can really spin the breaking ball.”

Diaz, who struck out 60 batters over this past season’s 30.1 innings, joins a Texas bullpen that already has a closer in junior Beau Ridgeway. Additionally, Chase Shugart allowed two earned runs over his last 10 relief appearances in 2017.

Nolan Kingham and Blair Henley are among the starting pitchers that Texas will return. The rest of UT’s staff, however, was recently raided by MLB scouts.

Little-used reliever Jon Malmin was the only senior pitcher on Texas’ roster, and he was one of seven UT pitchers taken in the MLB Draft. The Minnesota Twins used a second-round pick on high school hurler Landon Leach, and Galveston College left-hander Blake Pflughaupt went to Tampa Bay in the 27th round. Leach and Pflughaupt joined Diaz in Texas’ 2017 recruiting class, but neither pitcher will make it to Austin.

Last month, 11 Longhorns and four signees were selected over the course of MLB’s 40-round draft. Of the 12 players who had collegiate eligibility remaining, nine have signed. Pitcher Morgan Cooper is currently unsigned, but the Los Angeles Dodgers’ second-round selection has announced his intention to begin his professional career. UT is also waiting on a decision from prep outfielder Tristen Lutz, the 34th pick in the draft.