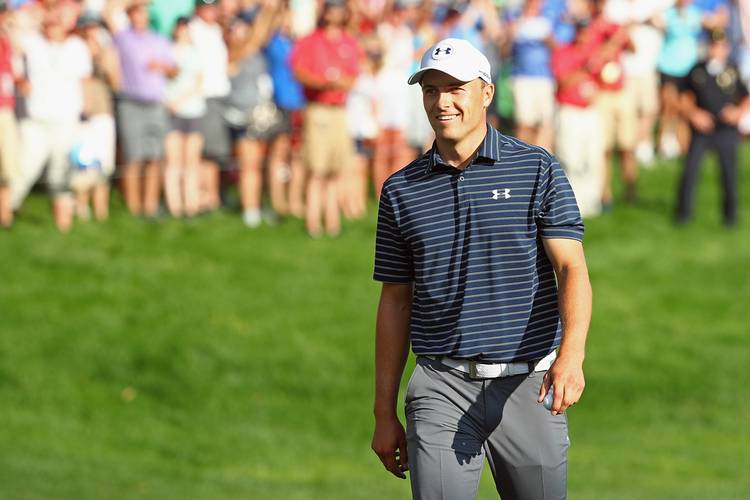 The club throw. The body bump.

Those are the indelible images from Jordan Spieth‘s victory in the Travelers Championship, where he holed a 60-foot bunker shot in a playoff to defeat Daniel Berger and capture his 10th title on the PGA Tour a month before his 24th birthday.

Not to be overlooked was a more serene snapshot — Spieth posing with the trophy.

It was the most comfortable he looked all day, even though he never trailed. This did not appear to be a case of enjoying the journey.

“I wanted the holes to go by quickly,” Spieth said. “That’s the only time I could say that about my wins.”

At the heart of such uneasiness was the uncertainty with his putting stroke on the greens of the TPC River Highlands. A normal putting round, at least by his standards, and there would have been no drama, no playoff and no celebration that ended with Spieth slinging his sand wedge with his left hand (he’s a natural southpaw), running out of the bunker and colliding with caddie Michael Greller.

The fact that Spieth had the 54-hole lead by one shot only exacerbated the tension he felt on the back nine. At stake was more than just a victory, but the chance to build on his reputation as a closer. That’s what Tiger Woods did better than anyone else.

RELATED: Jordan Spieth coming to a Wheaties box near you

Winning is winning. Comebacks are cool. But great players take pride in closing.

“I take more pride in it because I feel totally different,” Spieth said. “I’m a lot more uncomfortable in the closing scenario, playing with the lead. It’s more uncomfortable and makes it more challenging. The expectation is as long as I play the same as these guys, I win. If I’m not leading and I don’t win, then it wasn’t my day.”

Don’t get the idea Spieth is a nervous wreck when leading a tournament. He talks about chasing a ghost when he has the lead, which is a target score, and that can be more difficult than having to make up a deficit.

“By uncomfortable, I don’t mean that in a negative way,” he said. “I mean that in an added, rapid heart rate from when you wake up, which is uncomfortable. But I don’t want that to seem negative, because that’s the position to be in.”

He already has been there 13 times.

Spieth isn’t big on comparisons with anybody, least of all Woods. That’s a good thing when it comes to closing, because there is no comparison.

Woods won at a 92 percent clip (57-5) when he had at least a share of the lead going into the final round on the PGA Tour. That includes a 3-1 mark for Match Play, which effectively is the same as being tied for the lead with one round to play.

With his victory at Hartford, Spieth improved to 8-5. And what would he call that?

Spieth knows all about Woods and his records, and many of them would seem to be out of reach. What made him curious were the closing marks of other Hall of Fame players, such as Phil Mickelson, Ernie Els and Vijay Singh.

It would make him feel better about his own mark.

Mickelson was 24-14 when he had at least a share of the lead going into the final round, a rate of 63 percent. Singh was 18-14 (56 percent), which included a streak of converting 11 straight times over three years (2002-04) when the big Fijian was at the top of his game. Els had the best rate (75 percent) with the fewest opportunities of those three. His record is 12-4, though that’s only on the PGA Tour.

And as a testament to Woods as the consummate closer in golf, Jack Nicklaus had a 38-25 record in his career. That’s 60 percent.

It didn’t take a moment like Hartford — or even his failure at the Masters last year when he lost a five-shot lead on the back nine — for Spieth to contemplate the pride he takes in being a good closer. Coming off his 2015 season, when he won five times and chased the Grand Slam, he was asked what he could consider a great encore.

“Got to close tournaments out,” Spieth said that day at Kapalua. “I’ve been close a lot and closed out a little, and you’ve got to have the breaks go your way. But closing it out is something that’s a different mental edge than I really knew the last couple years prior to the 2015 season.”

Compared with his generation, Spieth is on the right track.

Dustin Johnson is 6-5 with at least a share of the lead going into the final round, while Jason Day is 8-7. Rory McIlroy has a 6-5 mark (only on the PGA Tour).

The common thread in all those records is opportunities, which is all any player should want.