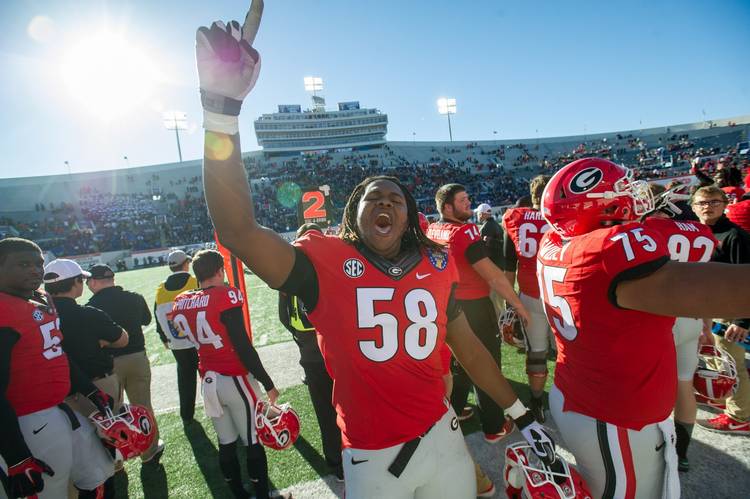 Best-case scenario: Sophomore quarterback Jacob Eason, a former five-star prospect, develops some consistency and improves his 55.1 percent completion rate to give this offense the balance it needs. No worries about a defense that returns 14 of its top 15 tacklers and 28 of its 29 sacks.

Worst-case scenario: The offensive line, which shuffled around personnel during and after a lackluster 2016, does not become a cohesive unit. The Dawgs scored just 319 points last season, the fewest since 1998.

The key game: Sept. 30, at Tennessee. The late October date with Florida probably will decide the SEC East, but the early trip to Knoxville will set the tone and is a revenge match after the Vols beat the Dawgs on a Hail Mary last year.

Spring cleaning: Four players could have left for the NFL draft but each came back for one last shot at pushing the Dawgs to the top of the division. They are RBs Nick Chubb and Sony Michel, who provide a potent ground game, and LBs Davin Bellamy and Lorenzo Carter, who help anchor a solid defense looking to take the next step.

Great expectations: The Dawgs were chosen to win the East at SEC media days. If you’ve heard that before, it’s because, well, you have. This is the fourth time in the last six years Georgia has been anointed the division favorite. It met those expectations only in 2012, the last time the Bulldogs won the East before losing a 32-28 title-game heartbreaker to Alabama. The Dawgs received the third-highest vote total to win the league, behind Bama and Auburn. Anything less than a title appearance in Atlanta will be a disappointment.

Which Chubb will he be?: Eight Dawgs were voted onto the various all-SEC teams, including four first teamers: Chubb, TE Isaac Nauta, DT Trenton Thompson and LB Roquan Smith. Chubb is the most interesting story. After exploding onto the scene as a freshman with 1,547 yards rushing in 2014, the 5-10, 228-pounder was knocked out of ’15 less than midway through with a left knee injury. He returned last year to rip off 1,130 yards, but his average plummeted from 8.1 to 5.0. Will the pre-injury burst return in ’17?

Top of the class: Kirby Smart, in his second season after leaving his Alabama defensive coordinator post, didn’t wow anyone in year one. His recruiting has, though. His first class ranked sixth nationally in the 247Sports composite. His 2017 class was third, a group that included 17 four-stars and trailed only Alabama and Ohio State. His two five-stars — OT Isaiah Wilson and S Richard LeCounte — could eventually start this year. Don’t sweat the 2018 ranking of 51st. The Dawgs are just scratching the surface. And Alabama is 53rd.