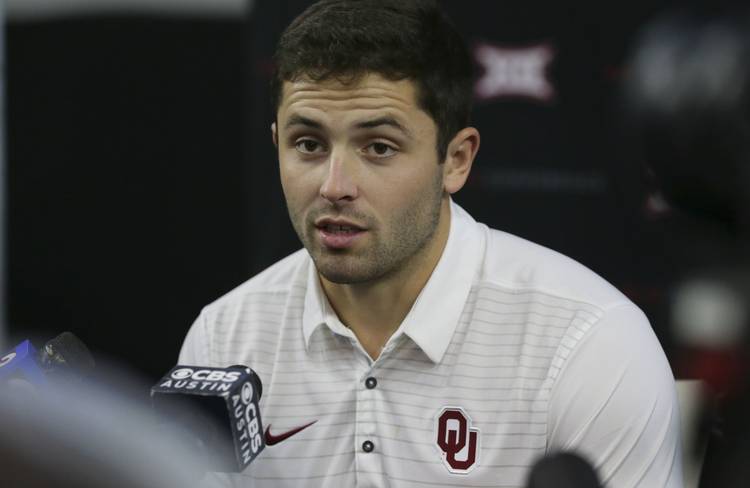 FRISCO — Like most of us, Baker Mayfield had dreams.

The Oklahoma quarterback, though, admitted at Big 12 media days on Monday that he didn’t see this much success coming. Yes, the overly-confident kid from Lake Travis who walked on at both Texas Tech and Oklahoma didn’t envision nearly 10,000 passing yards (7,665 at Oklahoma) and 104 total touchdowns.

Something that’s also hard to believe? He’s finally a senior.

“Crazy to think about. It’s flown by,” said Mayfield, who graduated from Lake Travis back in 2013. “It’s surreal for me to know that I’ve lived out this dream for years now and it’s almost over. I’m trying to enjoy every little bit of it.”

Mayfield finished third in last year’s voting for the Heisman Trophy. He earned the fourth-most votes in 2015. Oklahoma is 22-4 since he was named the Sooners’ starter, and he’ll likely end his career trailing only Landry Jones in career passing yards at the school.

Not all of Mayfield’s recent headlines, though, have been positive. He was arrested in Fayetteville, Ark. in February and pled guilty to public intoxication, disorderly conduct and fleeing the scene. As part of his team-mandated punishment, Mayfield was assigned 35 hours of community service.

Mayfield insists that he has learned from his mistake. He said Monday that “the best thing to come from all of that was the community service I’ve been able to do and make an impact in the Norman community.” As part of that, Mayfield said he has worked with organizations like Meals on Wheels and the Special Olympics.

“Since I’ve known Bake, he’s been very mature,” Brown said. “We all make mistakes. He’s kind of grown as he’s been here, and he’s continued to grow even though that situation happened to him.”

Cameron Batson, Texas Tech’s smartly-dressed receiver, is ahead of the class