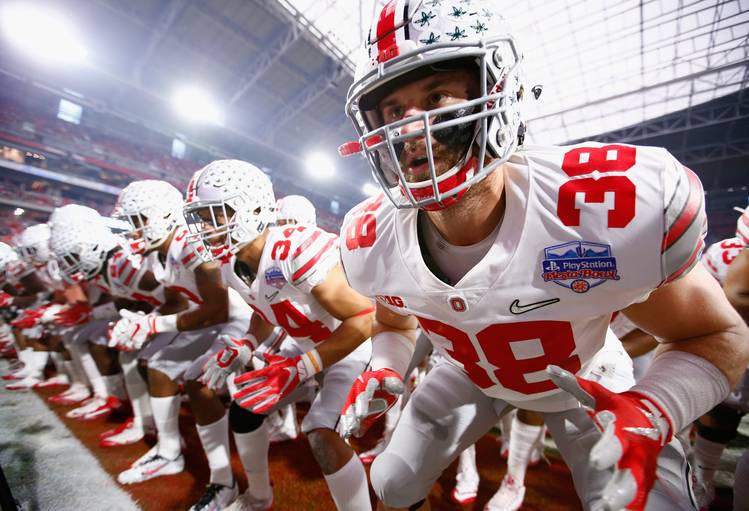 GLENDALE, AZ - DECEMBER 31: Craig Fada #38 of the Ohio State Buckeyes warms up prior to the start of the 2016 PlayStation Fiesta Bowl against the Clemson Tigers at University of Phoenix Stadium on December 31, 2016 in Glendale, Arizona. (Photo by Jamie Squire/Getty Images)

Today’s team: No. 2 Ohio State (Related coverage: A strong start for J.T. Barrett is essential for the Buckeyes)

Best-case scenario: Senior QB J.T. Barrett goes out with a bang, and the Buckeyes win their second national championship in four years. For all the great accomplishments — 100 career TDs, a 26-4 record — the former Wichita Falls Rider star has regressed in completion percentage and quarterback rating each year. The Buckeyes hope quicker decision-making, improved footwork and a better coaching staff brings out the best in Barrett.

Worst-case scenario: The offensive line, plundered for 28 sacks last year, shows no improvement, especially in big games where the unit was abused in 2016. The other area to watch is the secondary, which for the second year in a row departed early en masse to the NFL. The new faces are hot-shot recruits, but they have precious few college starts.

The key game: Sept. 9, Oklahoma. Thought we’d say Michigan, right? The Game will always be the tipping point, but pummeling the Sooners last year vaulted the Buckeyes to the College Football Playoff. Baker Mayfield vs. OSU’s new secondary, Big 12’s best vs. Big Ten power. This is the one.

Ruling the East: Though the Buckeyes made the CFP last year, they were one of the least experienced teams in the country and were always thought to be pointing toward 2017. So here we are. Of 38 beat writers in a Big Ten poll, 32 picked OSU to win the Big Ten East despite the presence of two other teams that went to New Years Six bowls. And 29 selected the Buckeyes to win the conference title game. “Ohio State has raised the bar in the Big Ten,” Nebraska coach Mike Riley said. “I saw that happen with Pete Carroll in the Pac-10. When USC started going, you better get better, or you’ll get left way in the dust.”

Recruitin’ em up: Only Nick Saban out-recruits Urban Meyer. The 247Sports composite team rankings for his five recruiting classes on campus — No. 2 (2013), No. 3 (2014), No. 7 (2015), No. 4 (2016) and No. 2 (2017). “Coming from the SEC to here, they look like the teams down there from an athletic and physical perspective,” said Indiana coach Tom Allen, who coached linebackers at Ole Miss from 2012-14. Two of the five consensus five-star freshmen are Texans already working out with the second team (South Grand Prairie DB Jeffrey Okudah and Kennedale DB Baron Browing). La Grange RB J.K. Dobbins, a high-end four-star, appears to be the first choice to back up Mike Weber.

No. 1: Coming Saturday. Want a hint? This school starts and ends with the letter A. And there’s two more As in between.