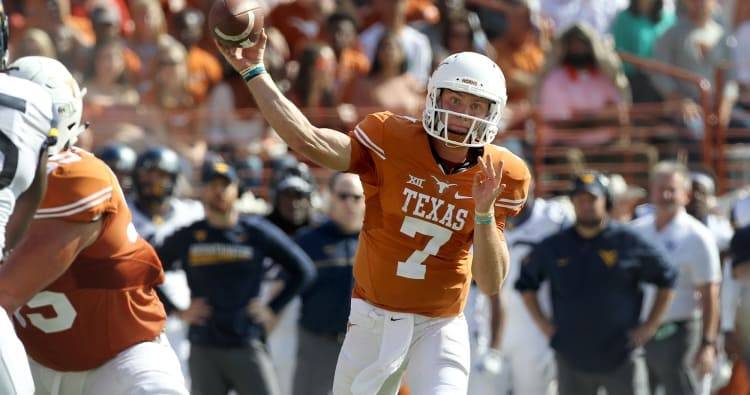 The Longhorns open training camp on Monday, and unfortunately nobody will be encased in bubble wrap.

Granted, the first practice is a time for uber-optimism. But the depth and health of the offensive backfield will require constant monitoring throughout August. It’s far more fragile than it looks.

The Longhorns’ lead running back must prove he can stay healthy. Chris Warren III missed the final eight games last season with a knee injury. He missed the spring game with a bad hamstring, too.

Warren’s backup, sophomore Kyle Porter, got sidelined by an ankle injury in the spring. Sophomore Kirk Johnson has undergone two knee surgeries and missed all of last season to heal. Sophomore Tristan Houston and freshmen Toneil Carter and Daniel Young are inexperienced.

Does Texas have any injuries going into training camp? “Nope,” Herman said, “100 percent.”

Texas offensive coordinator Tim Beck deflected a question about the state of the backfield by praising the players’ offseason work. “The transformation of their bodies and how they look from the end of spring to now, what a difference,” Beck said. “It’s pretty impressive.”

No coach or player goes into the season expecting the worst. But nobody’s a soothsayer, either. Former coach Charlie Strong built an entire offense around quarterback David Ash despite Ash’s history of concussions. He got knocked around in the 2014 season opener and was forced into early retirement. The season morphed into a 6-7 mess.

Herman and his staff worked overtime to find a graduate transfer at quarterback. The stars simply never aligned. So Herman went looking forward, securing two commitments from four-star prospects in the 2018 recruiting class. He landed another for 2019.

But in the here and now, it’s Buechele and Ehlinger. The offensive staff will have a small package for receiver Jerrod Heard “if a bomb blows up and Shane and Sam both can’t finish a game,” Herman said.

In a perfect world, Herman would love to redshirt one of those two, preferably the loser of the quarterback competition in August. Yes, the coach said, Ehlinger still has a chance to be the starter against Maryland on Sept. 2.

Buechele would appear to have the upper hand based on his experience, though. He threw for almost 3,000 yards and 21 touchdowns last season. And Buechele, now listed at 205 pounds after being at 191 last year, has supposedly blossomed this summer in seven-on-seven work.

“What you do in a controlled environment like that in shorts and T-shirts is not really indicative of how successful of a quarterback you’re going to be on Saturdays,” Herman said. “Now, with that being said, Shane has done a marvelous job of coming in this summer and really trying to be more of a leader.”

Beck said it was clear the previous staff tried to keep things simple for Buechele. His progress in the football classroom has been notable.

“He was able to grasp our system when he came in and was able to apply,” Beck said. “He can teach me now. I don’t have to lead the questions. He kind of knows that.”

Both Buechele and Ehlinger have an embarrassment of targets out wide. Receiver could be the deepest, most explosive position group on the roster. Collin Johnson, Armanti Foreman, Devin Duvernay, Lil’Jordan Humphrey, John Burt and Reggie Hemphill-Mapps are just the start. Don’t forget about seniors Lorenzo Joe and Dorian Leonard, either.

But most of those targets will get covered up if the Longhorns can establish the run again. This program ran with abandon last season under former offensive coordinator Sterlin Gilbert. Texas ranked second in the Big 12 with 239.3 rushing yards per game.

D’Onta Foreman became only the second 2,000-yard rusher in school history. Ricky Williams had 2,124 yards during his Heisman-winning season in 1998; Foreman had 2,028 yards last year.

Gilbert leaned hard on Foreman in October and November because Warren got hurt. It’s unclear whether Warren can stay healthy and carry more size on his 6-foot-3 frame. Warren, who has impressive straight-ahead burst but little side-to-side wiggle, is currently listed at 250 pounds.

Every player behind Warren came to UT with an impressive résumé. Porter ran for 1,938 yards as a senior at Katy. He’s averaged 4.5 yards on 46 carries at UT. Everyone else is fairly untested.

There are other questions, to be sure. Who wins the job at right tackle, senior Tristan Nickelson or sophomore Denzel Okafor? Who are the top 1-2-3 receiving threats? How will the offensive staff handle the tight end position?

All of those questions will fade away fast if the Longhorns can’t keep their two quarterbacks upright and the running backs healthy in August.