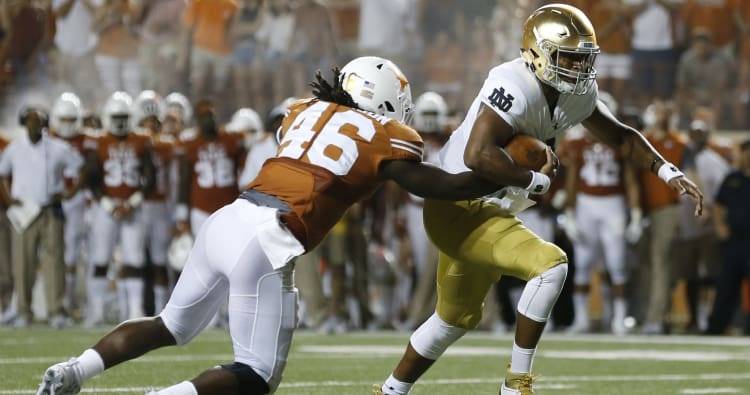 Today’s notable number is one.

One is the number worn at Texas by junior receiver John Burt. Tom Herman has one career game against a Big 12 opponent on his head coaching résumé, Houston’s 33-23 win over Oklahoma in 2016. And only one Longhorns defensive player — defensive tackle Poona Ford — started every one of UT’s 12 games last year.

One also accounts for the number of quarterbacks who rushed for 100 yards against Texas in 2016.

Aided by a 50-yard jaunt and a hurdle over UT safety Dylan Haines, Baylor’s Seth Russell ran 21 times for 138 yards in last year’s 35-34 loss in Austin. Russell was recruited out of high school as a dual-threat quarterback. That, though, was only the second 100-yard game of his career.

Texas’ resolve against mobile quarterbacks will be tested immediately this season. Maryland will start sophomore Tyrrell Pigrome. Texas defensive coordinator Todd Orlando expects to see freshman Kasim Hill play a bit as well, but the Longhorns are game-planning for Pigrome, a three-star recruit who ran for 1,349 yards during his senior year in high school. He was labeled an “athlete” during the 2016 recruiting cycle; the Alabama native averaged 4.1 yards in his 62 carries as a freshman last year and completed 37 of his 71 pass attempts.

To prepare for the 5-11, 196-pound Pigrome, Texas has turned to its scout team. Reserve quarterback Josh Covey, who originally walked onto the team as a receiver, has provided the defense with some looks. Sophomore running back Tristian Houston also has lined up at quarterback.

“We have a couple guys on our scout team that basically do the same thing that he does and mimic his runs and basically are Pigrome. The scout team guys have been giving us a great look,” senior linebacker Naashon Hughes said.

Pigrome won’t be the only quarterback on Texas’ schedule who can run. USC’s Sam Darnold, Baylor’s Anu Solomon and Hill all were listed as dual-threat quarterbacks in high school. Ertz was the No. 58-ranked pro-style quarterback in the 2013 class by 247Sports’ composite, but he led Kansas State last year with 1,012 rushing yards.

Texas vs. Maryland: A Q&A with a Terrapins beat writer