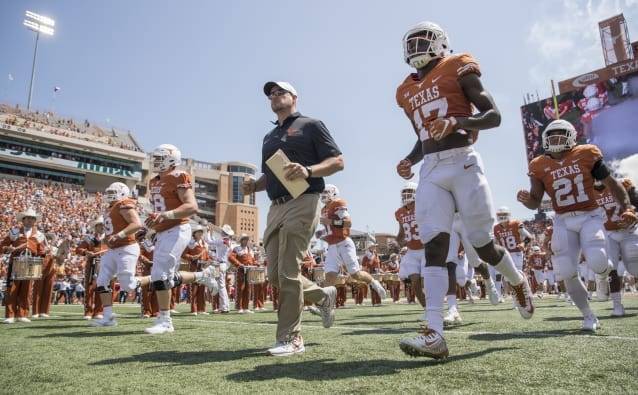 Texas has had its struggles on the road over the past few years. Not that the Longhorns have been unbeatable at Royal-Memorial Stadium either, but they’ve dropped eight of their last 10 true road games.

On Monday, however, head coach Tom Herman wasn’t worried about that road record. As he prepares for his first-ever road trip with the Longhorns — Texas is at No. 4 USC on Saturday — Herman said he was more focused on routines.

Continued Herman, who said the Longhorns will keep the same pregame routine: “That’s probably the biggest challenge, is just making sure we’re dialed in and focused just as if it were a home game.”

Saturday’s game has been circled on the calendar of Texas fans since UT’s 2017 schedule was finalized. For one, the Longhorns and Trojans will be playing each other for the first time since the 2005 BCS national championship game. Since UT’s only other out-of-state trips are to Ames, Iowa and Morgantown, W. Va., a trip to Los Angeles is also a draw. A rebuilding program, however, may not be as excited.

Herman said he liked the way Alabama schedules its non-conference games. Since 2012, Alabama has opened its season with a marquee match-up that has been played at a neutral location. This year, Alabama beat Florida State in Atlanta.

Texas, of course, plays Oklahoma each year in Dallas. Aside from the Sooners, the last non-bowl game that UT staged in a neutral location was its loss to UCLA in 2014 at the Cowboys’ AT&T Stadium.

TE turnaround: Garrett Gray will miss this week’s game with a knee sprain, Herman announced. The junior tight end started the opener against Maryland but was injured during last week’s rout of San Jose State. Gray, who hails from Marble Falls, has four receptions this season.

While the Longhorns lost a tight end, they’re gaining another. Freshman Reese Leitao is now eligible after serving a two-game suspension to start the season. In May, Leitao plead to a misdemeanor drug charge.

Herman said it was too early to determine Leitao’s role with the team. Since Gray is injured, however, he’ll practice this week with either UT’s first- or second-string offenses rather than working on the scout team, Herman said. Either graduate transfer Kendall Moore or freshman Cade Brewer will start on Saturday.

The post Texas notebook: As they head out west, Longhorns hope to stick to a routine appeared first on HookEm.