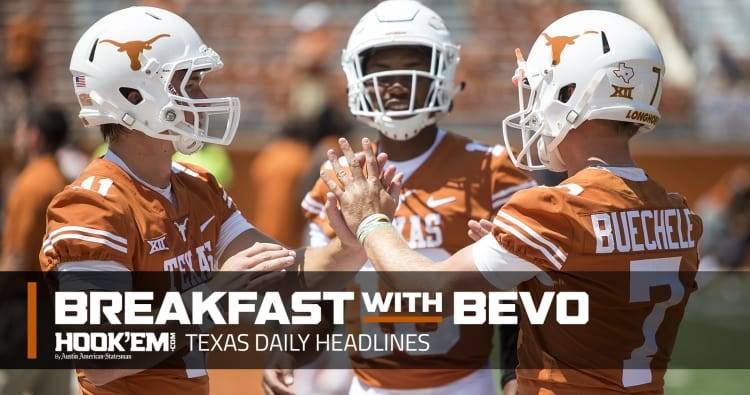 Texas released its depth chart Monday ahead of its game Saturday against No. 4-ranked USC, and it had one glaring difference from the previous one. At quarterback, the Longhorns listed “Shane Buechele OR Sam Ehlinger.”

Buechele, who sat out against San Jose State to rest his injured throwing shoulder, remains the starter as long as he is healthy. The sophomore threw for 375 yards, 2 touchdowns and an interception in the season opener against Maryland.

Still, many were impressed with the poise shown by freshman Sam Ehlinger in his first start on Saturday, when he threw for 222 yards and ran for 48 in a 56-0 rout. Junior Jerrod Heard also ran for 39 yards out of a wildcat package.

So, who would you start at quarterback against the Trojans? Vote below.

Who should Texas start at QB?

The early lines have Southern California as a 17-point favorite to beat the Longhorns at home in the Los Angeles Memorial Coliseum. This is a far cry from the heavyweight bout that happened a few miles down the road in 2006. Tom Herman didn’t shy away from his team being the underdog during his press conference on Monday.

Herman on USC: “Yeah, we are an underdog.”

Speaking of that magical January 2006 night at the Rose Bowl, it appears one of the schools involved is trying to erase that game from history. We know it’s not Texas. In its media guide, USC asserts that it is “4-0 in its series with Texas (not including 1 loss vacated due to NCAA penalty).

In actuality, only the Trojans’ final two wins of their 2004 national championship season and all 12 wins of their 2005 season were vacated. The 2006 national championship — arguably the greatest college football game every played — very much still stands. Longhorns fans can recite every minute of it while they’re in Los Angeles this weekend, if the Trojans really have forgotten.

The post Does Texas have a decision to make at quarterback? appeared first on HookEm.