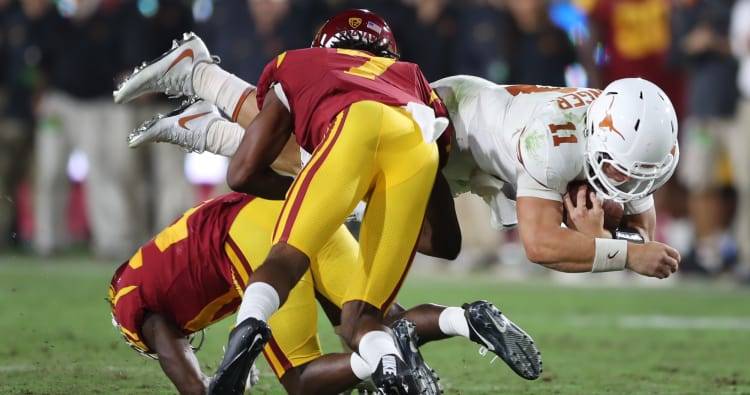 This week’s notable number is 11.

Eleven is the number worn by junior defensive back P.J. Locke III and freshman quarterback Sam Ehlinger. This week, Texas is attempting to avoid an 11th loss in its all-time series with Kansas State. Sophomore Shane Buechele is 11th on UT’s all-time passing chart with his 3,504 yards.

Eleven also accounts for the number of four-minute drives recorded by Texas this season.

Texas has sent its offense onto the field 53 times this season. UT’s offensive issues — an injury-plagued line, two options at quarterback and an inability to establish the run — have been well-documented. Texas, though, has found some success. Among the 129 FBS-level teams, Texas ranks 45th in both scoring (34.5 points per game) and total offense (443.5 yards).

Only nine teams have fared better than Texas when it comes to time of possession.

For the season, Texas is holding onto the football for an average of 34:15 each game. Texas has pieced together 11 drives that lasted at least four minutes, including a 7:35 possession that closed out the win over the Cyclones. Twelve of the Longhorns’ drives have featured at least 10 plays. UT only has 11 three-and-out possessions this year.

Herman’s Houston teams actually ranked 14th and 38th nationally in time of possession over the past two years. Herman said before the season his offense would take a “fairly moderate tempo” approach, but the Longhorns weren’t “just going to run plays to run plays and try to get 80, 90 plays a game.”

Four games into the season, controlling the clock has had its benefits. As Herman noted this week, “we’re keeping our defense off the field, keeping them fresh.” UT is listed 40th on the NCAA stat sheet in total defense (344.3 yards per game) and 43rd in scoring defense (21.3 points per game).

Kansas State is averaging 29:37 with the football each week, which ranks 76th nationally. Using an effective rushing attack, the Wildcats have boasted a top-25 ball-control offense in each of the last three seasons. Kansas State ran 78 plays in last year’s 24-21 win over Texas; the Wildcats held onto the football for over 38 minutes.

Kansas State has run for 916 yards over its four games, and its top three rushers are averaging at least 5.3 yards per carry. How exactly will the Longhorns keep this Kansas State offense off the field? Defensive lineman Charles Omenihu, who has nine tackles and a team-high two sacks, said the Longhorns have a basic game plan.

“Play assignment-sound football, that’s really what it is,” Omenihu said. “Tackle when you have the opportunity to tackle. Trust your training, trust what the coaches tell us and what we see on film.”

The post Texas’ notable number: Time of possession — and the number 11 appeared first on Hook ‘Em.