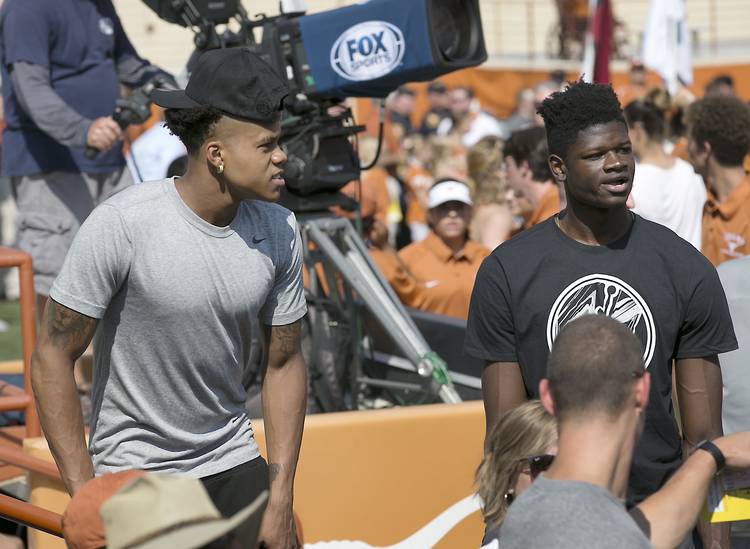 The Texas marketing department thinks long and hard before choosing which players’ photos get plastered across billboards, city buses or game programs. It’s a signal to fans that this is a player to watch.

Usually, the marketing department builds its season ticket campaigns around veterans, someone who fans have come to know and cheer for.

Mo Bamba is changing all of that. The Texas freshman is front and center on just about every UT marketing piece that’s gone out. He’s been interviewed on the Longhorn Network’s pre-game football show and donned a black cowboy hat for an in-game interview on the Godzillatron.

This all comes before the 6-11 freshman center has played a single game in burnt orange. Alas, he may be that good. “Mo is a unique player,” Longhorns coach Shaka Smart said, “and he has the ability to impact a team in some very, very powerful ways.”

Longhorns fans can judge for themselves at 7 p.m. Wednesday during the Texas Tip-Off event at Gregory Gym. It’s the unofficial start to the season, even though the Horns have been practicing in Cooley Pavilion for several weeks.

Admission is free, however everyone must obtain a ticket beforehand. Only the first 3,000 fans will be allowed in. General admission seating is on a first-come, first-served basis. Doors open at 6 p.m. The team will have an intrasquad scrimmage from 7-8:30 p.m.

Bamba is far from the only newcomer worth examining. Freshman Matt Coleman is the long-coveted point guard Smart has needed. Junior Dylan Osetkowski is now eligible after sitting out last season per NCAA transfer rules. A host of other newcomers have joined trusted veterans Andrew Jones, Kerwin Roach Jr. and Eric Davis.

But Bamba is likely to be the face of the program this season, much like Jarrett Allen was last year. Bamba, the nation’s second-ranked recruit, has already been dubbed the Big 12 preseason freshman of the year. He’s a huge reason why UT landed four spots on ESPN’s “Big Monday” broadcasts.

“To be honest, a lot of that’s up to him, because he’s good enough talent-wise to be that,” Smart said. “He’s a good enough kid to be that. But there’s a lot of responsibility and a lot of obligations that come with that.”

Smart resists putting extra pressure on any individual player. “Everyone on our team has a very valuable role, and at minimum, five guys at a time are contributing in a huge way to anything that’s going on the court,” he said.

The school needs to promote Bamba while it can. He’s likely a one-and-done player, as he’s already projected to be a top pick in the 2018 NBA draft. Until then, Bamba is clearly enjoying campus life. He’s been to several volleyball games and a women’s soccer match, waving the “Hook ’em” hand sign everywhere he goes.

“If you think about a guy like Mo, everyone is always trying to put him over here as someone that’s unique and different, and in a lot of ways he is,” Smart said. “But sometimes he wants to be part of something, too. I think he’s enjoyed that so far here.”

In fairness, Bamba is merely one vital cog in the Texas engine that’s been dramatically retooled this offseason.

Smart had plenty of time to think about last year’s 11-22 disappointment. For the first time, he wrote out what Smart called a “culture document” that details every aspect of what he wants the program to be. “It’s basically a description of who we want to be, who we want to move toward,” he said.

Smart joked that his assistants want him to forget about last year. But he’s been looking back in a journal he keeps to see what he wrote last season. “It’s easy to take for granted the good feeling that comes from winning,” Smart said. But what about when your team is losing?

“It gives you a real sense of urgency,” Smart said. “At Texas, there’s some unbelievable things that come from being a student-athlete here. But you have to want all the things that you’re going after on the court more than the guy you’re going up against.”

During the offseason, Jones tested the NBA waters to see where he could improve. Roach and Davis both worked on their outside shots and stamina. All three will be expected to provide leadership for newcomers like Jase Febres, Jericho Sims and Royce Hamm.

“Our guys’ spirit has been really, really good,” Smart said. “I’m interested to see once we get out there in front of fans to see how everything evolves.”