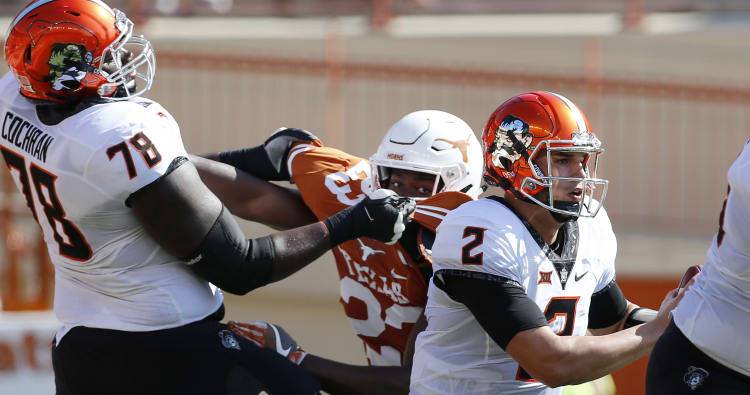 “We’ve got an opportunity to send these seniors out with a bowl game, something they haven’t had the last two years,” Herman said after Saturday’s 13-10 overtime loss to Oklahoma State.

Herman, who ripped the “mediocrity and sub-mediocrity” that plagued the program before his arrival, is looking at a similar mediocre fate in his first season if things don’t turn around quick.

On paper, Texas should have an easy time against Baylor (0-7, 0-4). But nothing’s a given anymore, not with this bunch that can’t run the ball, won’t utilize its best receivers and collapses at the finish line.

“We don’t have a running game,” running back Chris Warren III said. “I think that we’re too one-dimensional and that’s easy to predict, so that’s why we’re not helping the defense.”

Texas has held fourth-quarter leads against No. 4 USC, No. 12 Oklahoma and No. 10 Oklahoma State and lost all three games. This team is playing hard enough to overcome some mistakes. But the Horns aren’t anywhere close to being good enough to mask them all.

“They’ve been a part of teams that were far away, and you know it when they are,” Herman said. “This one’s not. This one’s really close. And I don’t know when we’re going to break through that barrier.”

Most fans will target their anger at offensive coordinator Tim Beck, who only speaks to reporters on Wednesdays. But in many ways, that’s misguided, same as it was to criticize former defensive coordinator Vance Bedford for running Strong’s defense.

The Longhorns are running Herman’s offensive system, the one he brought from Houston. Herman has clear established ground rules that he’s in charge of everything. He’s the one getting paid $5.25 million annually to turn Texas around, not Beck.

Still, it’s clear the offense as presently constructed is flawed. There is simply no way the Longhorns can have long-term success if freshman Sam Ehlinger remains both the team’s quarterback and de facto running back.

Once again, Beck, as the team’s play-caller, abandoned the run in a tight ballgame. Warren had only 12 carries for 33 yards. Ehlinger had 16 carries for minus-10 yards, a figure ruined by a 34-yard loss on a fumble.

Freshman Toneil Carter, a player Herman has been indicating would get more touches, had one carry for three yards.

Oklahoma State sure stuck with the run, though. Justice Hill carried it 33 times for 117 yards while J.D. King had 11 carries for 43 yards and a touchdown.

“I don’t know. I’m gonna do what’s asked of me,” Ehlinger said when asked about the running game. “Obviously that’s an area we need to fix. When we have such a low amount of rushing yards, it’s obvious for everyone to see that. Because when we open up the running game, we can open up the pass game.

“It’s tough,” he added. “There’s a lot of really good teams up front. Those are big guys, and I think we’re doing our best.”

Everyone got a participation ribbon and at least one catch at receiver against the Cowboys. Well, that is everybody except the team’s leader in touchdown catches.

Armanti Foreman was effectively benched again on offense for the third straight week, and there’s still no clear reason why. All Herman has said is that others are practicing better.

Foreman’s father, Derrick, isn’t afraid to speak up on Twitter. “Yes I’m bitter about my son being bench for personal reasons,” Foreman tweeted on Saturday as part of a scathing post-game rant. “But I’m more upset that he’s egotistical enough to believe he has that luxury!”

The coaching staff also docked Collin Johnson, the team’s leader in receiving yards, some playing time against OSU. Senior Dorian Leonard got the start and had a team-high four receptions for 26 yards.

Johnson wasn’t even on the field on the game’s final, fateful play when Ehlinger threw an interception in the end zone in overtime.

Linebacker Malik Jefferson said it’s important the defensive players keep their focus. “But it’s also important that have the team focus together,” he said. “It’s going to be crucial moving forward that we keep each other up in situations like this.”

It speaks volumes when you can build an argument that UT’s best player is the punter. Michael Dickson is having an All-American season, one worthy of Ray Guy Award consideration. He moved into the No. 1 spot nationally this weekend in average (49 yards).

The defense is certainly getting better each and every week. The offense is regressing, something that seemed unthinkable given Herman’s track record.

If Texas can’t get something figured out, a .500 finish may look good considering the alternatives.

“(The defense) played well enough to beat any team in the country, I feel,” Warren said. “We’ve got to help them, point blank.”