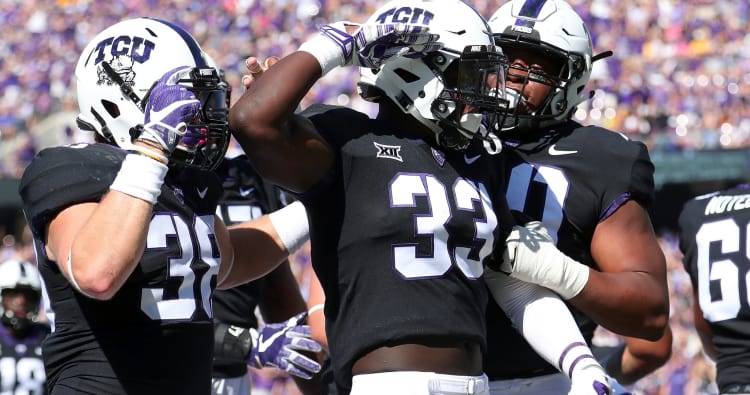 FORT WORTH — They fondly call the stadium “The Carter.”

TCU players and coaches think of their stadium — it’s Amon G. Carter Stadium to the common folks — in near reverential terms. They love all its pulsing, purple pizzazz.

They’re also hopeful that coming home will be healing.

It also helps that TCU immediately can regroup in front of the passionate home folks.

TCU coach Gary Patterson calls Saturday’s Texas-TCU matchup one of those “emotional” games. He doesn’t need many tricks to motivate his team.

The players just love the thought of playing in their favorite spot.

“It’s always huge playing in The Carter,” said TCU receiver John Diarse. “I don’t know how many night games you’ve been to in The Carter, but it’s always special. To be back in front of Frog Nation, let those guys cheer us on and compel us to do what we do best, there’s no better feeling than that.”

The Frogs tumbled from fourth to 10th in the Associated Press poll following their loss to Iowa State. The defeat, at least temporarily, took TCU out of the top tier of national playoff contenders. They’ll probably need an upset or three nationally to climb back into the mix.

But the loss to the Cyclones didn’t take Big 12 control away from TCU. November is simple. Stay unbeaten, through home games against the Longhorns and Baylor at the beginning and end of the month, sandwiched around road dates at Oklahoma and Texas Tech, and TCU is in the conference title game.

Of course, three other teams control their own league destinies as well, so coaches from Oklahoma, Oklahoma State and Iowa State are preaching the same message. Win out and a spot in the Big 12’s revived championship game is yours.

“There’s a lot in the next four weeks,” Patterson said. “There’s a lot of football to be played by a lot of people. There’s a good chance, a really good chance, that the second team in the championship game will have two losses, and the way it’s all going, maybe three.

“The tiebreaker may be on three losses, not two losses. There’s a lot of football left to be played.”

Patterson will be playing his 100th game at the home stadium. He’s 80-19 in Fort Worth, with four of those wins, including two shutouts, coming this season. He’s 19-0 at home when his Frogs are ranked among the nation’s top 10.

The TCU defense was extraordinary against the Cyclones, shutting out Iowa State in the second half and limiting them to 53 rushing yards on 33 attempts. Special teams sensation KaVontae Turpin scored on a 94-yard kickoff return. It was his second touchdown return of 90-yards plus in as many games.

But the Frogs offense, which had been clicking at a pace of 41.5 points and 466 yards a game, stumbled mightily against the Cyclones. TCU failed to score a single point on offense and was held to 160 yards below its season average.

Patterson said he could tell before the Iowa State game started that the Frogs weren’t mentally ready. He said he’s been coaching for so long he can pick up the subtle signs of a distracted team.

But as has been pointed out to the players, TCU still is the same cohesive team that won its first seven games.

The post With Texas coming to town, TCU feels so comfortable at ‘The Carter’ appeared first on Hook ‘Em.