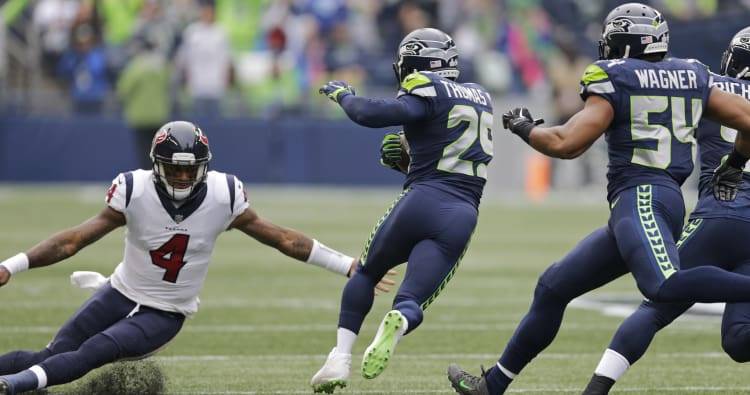 Earl Thomas had a big game for the Seahawks in the electrifying 41-38 win over the Houston Texans. Thomas had five tackles and made a huge play by intercepting Deshaun Watson and returning the pick 73 yards for a touchdown. The Seahawks needed every point in the back-and-forth contest. Unfortunately, Thomas pulled up with a hamstring injury later in the game. It won’t be determined until later in the week if Thomas will miss any game action.

Know where @Earl_Thomas is on the field at ALL times…

The New Orleans Saints are on a roll, due in large part to the play of the defense. Kenny Vaccaro was a big part of their success in Sunday’s 20-12 win over the Bears, making nine tackles to lead the team and recording half a sack. He also had 2.5 tackles for loss and a pass deflection. Alex Okafor also had a pass deflection, four tackles and half a tackle for loss for the Saints. Vaccaro and Okafor are two Longhorns in the NFL currently on the upswing.

Adrian Phillips, CB, Chargers—Phillips led the Chargers with 12 tackles, but they lost 21-13 to the Patriots on Sunday.

Jamaal Charles, RB, Broncos—Charles had eight rushes for 39 yards and caught one pass for five yards. He also lost a fumble that was returned for a touchdown. It’s the second time he’s lost a fumble this season.

Derrick Johnson, LB, Chiefs—Johnson had six tackles in the 29-19 win over the Broncos. He also deflected a pass.

Quandre Diggs, CB, Lions—Diggs made five tackles, including two tackles for loss, in the 20-15 loss to the Steelers.

Sam Acho, LB, Bears—Acho had four tackles in the loss to the Saints.

Justin Tucker, K, Ravens—Tucker didn’t have to make a clutch kick this week, connecting on 2-of-3 field goals and four extra points in the 40-0 win over the Dolphins.

Lamarr Houston, LB, Texans—Houston had three tackles and two for a loss in the loss to the Seahawks.

Nick Rose, K, Redskins—Rose went 2-for-3 and missed an extra-point (sound familiar?) in the 33-19 loss to the Cowboys.

Geoff Swaim, TE, Cowboys—Swaim made one catch for 18 yards in the Cowboys’ win.

Malcom Brown, DT, Patriots—Brown made one tackle in the win over the Chargers.

Hassan Ridgeway, DT, Colts—The defensive tackle had one tackle in 24-23 loss to the Bengals.

Roy Miller, DT, Chiefs—Miller was inactive in the Chiefs’ win over the Broncos. It’s the second game in a row that Miller’s missed.

Marcus Johnson, WR, Eagles—Johnson didn’t make any catches in the Eagles’ 33-10 win over the 49ers.

Brian Robison, DE, Vikings—Robison didn’t record a stat, but his Vikings won 33-16 over the Browns.

Trey Hopkins, OG, Bengals—Hopkins and the Bengals barely outlasted the Colts 24-23. The Bengals rushed for just 58 yards and the o-line allowed three sacks.

Marquise Goodwin, WR, 49ers—Goodwin wasn’t able to contribute to the offense in the 33-10 loss to the Eagles. It was the first time he didn’t make a catch this season.

Colt McCoy, QB, Redskins—McCoy wasn’t called into action in the loss to the Cowboys.

D’Onta Foreman, RB, Texans—Foreman played just one snap in the Texans’ loss to the Seahawks.

Brian Orakpo, LB, Titans—Orakpo and the Titans were on a bye in Week 8.

Malcolm Brown, RB, Rams—Brown and the Rams were on a bye in Week 8.

Keenan Robinson, LB, Giants—Robinson and the Giants were on a bye in Week 8.

Phil Dawson, K, Cardinals—Dawson and the Cardinals were on a bye in Week 8.

Jordan Hicks, LB, Eagles—Hicks ruptured his Achilles on just the second play of the 34-24 win over Washington in Week 7. He’s out for the season. Hicks finishes the year with 28 tackles. It’s the second time in his three-year career that he’s been unable to complete the season.

The post Longhorns in the NFL: Week 8 highlighted by defensive fireworks appeared first on Hook ‘Em.